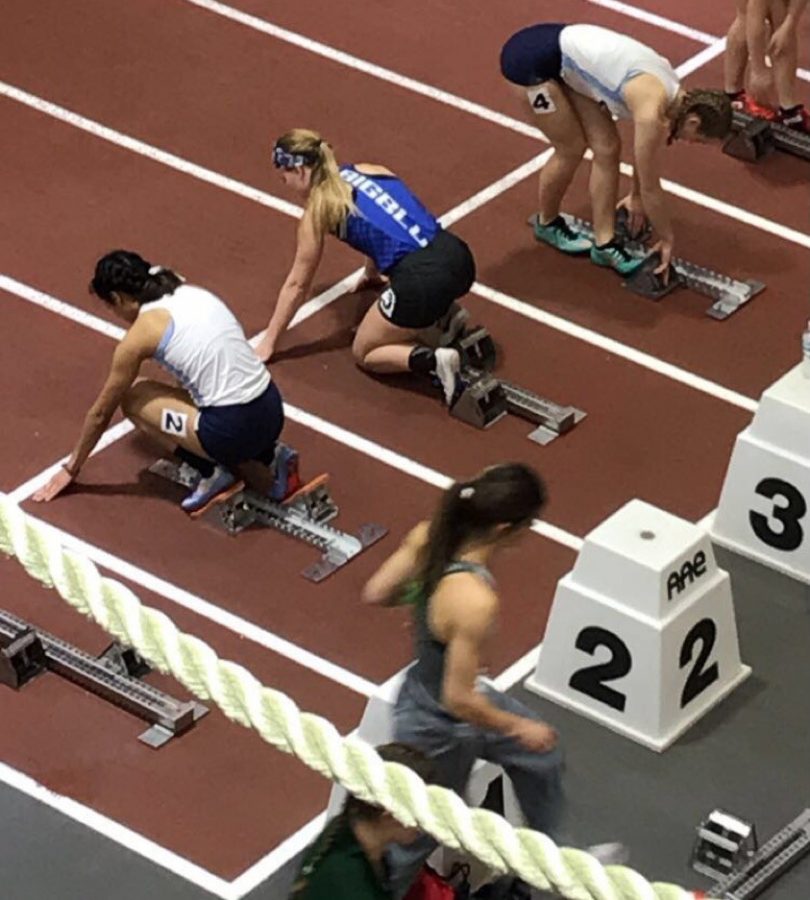 By Charlize Pate
The outdoor season has officially begun for Millikin Track & Field! While other students were enjoying their time off, the track and field athletes were tearing it up at the University of Houston Spring Break Invitational. The team took a bus to Houston, Texas to compete in a Division I competition on March 14.

The men’s team had six people place at the meet, some in multiple events. This is especially encouraging considering much of the team was absent. While no records were broken, it was a great start to the outdoor season!

The men ended their indoor season back in February with a bang, finishing third at the CCIW Indoor Track and Field Championships with a total of 71 points. The team fought hard, beating Wheaton by one point.

The athletes were not the only ones who finished out the season strong—the team’s coaches, Andrew Craycraft, Nicole Wetstein, Dylan Lafond, and Melanie Heslop, were named the Men’s Coaching Staff of the Year.

Over the course of the indoor season, there were 22 top ten performances for the men’s team, three of which were school records. The first record was Dalton Collins in the 600-meter dash at 1:24.04, but his teammates Ethan Meyer and Ben Kuxmann were close behind earning the second and fourth places on Millikin’s top ten list respectively. These three also earned the school record in the 4×400 meter relay along with their teammate Jackson Allen with a time of 3:24.23. And last but not least, with a throw of 15.85 meters (or 52 feet), Aeon Johnson got the top spot in the weight throw.

With so many great things happening back in the indoor season, there is clearly a lot to look forward to in the outdoor season.

Continuing the outdoor season, the team competed at EIU on March 29 and 30. Unfortunately, the meet was shortened due to weather conditions, but they were still able to complete some of the scheduled events. The first day of the meet went on as planned, but the next day made several attempts to continue the meet before eventually having to stop due to the continuously dropping temperature. The throws were completed outside, and the jumping events were held indoors, while only two of the running events were able to happen outside on Saturday.

This made for an interesting transition to the outdoor season for the athletes who did not compete over spring break. And despite the weather and strange conditions, those who did have a chance to compete still made the best of their situation.

But after this last frigid meet, the team is getting ready for the upcoming home meet on Saturday, April 6. The excitement is high, especially in the athletes who did not have a chance to compete this last weekend. It will be the first and only home meet of either the indoor or outdoor seasons, so it will be the only chance for the Big Blue athletes to really show out in front of their friends.
By Ben Kuxmann
The women’s track and field indoor season has also concluded (quite successfully) and there is much to look back at with pride and to look forward to heading into the outdoor season. The team finished sixth at the CCIW Championships, matching their finish from last year’s meet, while also winning the Rose-Hulman Engineer Invite back on January 18. Contributions to the team’s overall performance are not limited to a particular event group, points come in from multiple individuals in various events.

Jumping accounted for 15 of the team’s total points, sprinting events contributed 11 points, distance gave the team 10 points, throwing chipped in 2 points, and the school’s lone pentathlon athlete scored 3 points. In addition to clutch individual performances, the team’s two relays, consisting of the 4×400 and the DMR, added 11 points to the team score. Big Blue had a total of 13 all-conference performance including a successful 800-meter title defense from sophomore Mackenzie Dixon.

The team’s performance at the conference meet displays the variety of talent spread around the team, and any team that does not have to rest on the backs of a handful of individuals is in a good place moving forward. Success on the part of both relays also displays the team’s depth which should raise excitement for the skill level of the team.

Another area that should turn heads of fans and opponents alike is the number of all-time Millikin top 10 performances set this indoor season. The team earned 22 top-10 performances including 3 school records! These records include Charlize Pate in the pentathlon, Alyssa Vignos in the 60-meter hurdles, and a team effort of Erin Lukens, Brianna Niebrugge, Mackenzie Dixon, and Hailey Wimberly in the 4×400 meter relay.

While all-conference accolades and school records are all fine and dandy, this is not the end of things to celebrate from the women’s indoor season. Big Blue had 2 representatives at the NCAA Division III National Championships in Boston, Massachusetts. Mackenzie Dixon finished as the eighteenth fastest athlete over 800 meters, while sophomore Brea Blackwell finished as the eleventh best triple jumper in the nation. Well done ladies!

With a successful indoor season of competition and training in the books, the women’s team now turns their sights towards an outdoor season. The team has already competed over spring break in Houston, Texas against Division I competition. Find another Division III program with the gumption to do that, you won’t.

Having an outdoor meet already under the belts of the athletes will be beneficial as they move through the season against teams whose first time competing on an outdoor track will be in the coming weekends. Getting the first competition jitters out for a large portion of the team will benefit their mental preparation going into the remainder of the season.

The upcoming outdoor season should be looked upon with optimism for the women’s team. The team is very young but still managed by a couple of skilled upperclassmen that can show their young team how to continue to grow on and off the track.

The vast number of records and top-10 performances already achieved during the indoor season is cause for excitement as we look forward to what can be accomplished running on the faster outdoor tracks. Let’s also not forget, the CCIW male coaching staff of the year is also the same coaching staff for the Big Blue women’s team, so the resources, as well as the talent, are all in place for the team to turn some heads and dust some people on the track.

Be sure to keep up with the track team come out and support the team during their home meet on April 6, they are going to excite you.