Terrence Floyd to Speak at Millikin 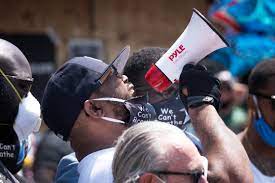 On Tuesday, Feb. 22, 2022, activist Terrence Floyd will be speaking at Millikin. This event will take place in KFAC at 7 p.m.

After Minneapolis police officer Derek Chauvin killed George Floyd in May 2020, protests spread across the country in support of the Black Lives Matter movement. Terrence, George’s brother, will be speaking about his life and activism following George’s murder.

“We can hear the personal side and we can also hear his ambitions, his goals, his dreams as far as philanthropy and moving forward from all of this…to branch out to the Black community and those who are going through and possibly might go through these things in the future,” Serron Pettis said. “I definitely am excited that I get to be a part of it.”

Pettis is a student leader who will serve as a moderator at Tuesday’s event.

Nikki Garry, Director of Campus Life for BIPOC Student Support, spearheaded Terrence’s appearance as part of Millikin’s Black History Month programming. As she was planning the month’s main event, she knew she wanted to bring in a speaker who is related to the Black Lives Matter movement. When she learned that Terrence was available, the decision was “a no-brainer.”

Garry hopes that the event will have a lasting effect on Millikin.

“I hope we have a greater sense of unity and a greater desire or appreciation or drive for equality,” Garry said. “I think so easily in this season, we talk about diversity, equity and inclusion. Everyone talks about [it], but I really want to see us put action behind that and it not just be a conversation starter.”

According to Terrence’s official bio, this is one of the main reasons why he makes these appearances. He encourages action.

“Terrence shares proactive solutions for ending racial and structural inequality in ways that bring about real and lasting change,” the bio reads. “He poignantly moves audiences with his brother’s story and inspires younger generations to make a difference, know their worth, and realize they too have a voice and a purpose that needs to be heard.”

Pettis knows that Terrence will talk about his brother, but he also wants to hear more about Terrence’s philanthropy work. Terrence currently serves as a board member of The George Floyd Memorial Foundation, Inc. and the founder of the nonprofit We Are Floyd. These organizations are committed to community service, fighting against systemic racism and honoring George

“[Terrence] says he wants to put things in place so people can have a chance to explore and be a better version of themselves,” Pettis said. He plans to ask Terrence about this and how people can look inward and work to improve.

Pettis thinks that Terrence’s speech will resonate with students because his brother’s death happened recently and started widespread conversations about racism and police brutality. Pettis encourages students to remember how these events affected their lives, but he hopes audience members to take more from Terrence’s story. He wants them to think about how tragedy can be used to help others.

“I hope they don’t just focus on George Floyd and the murder of him, but they focus on the way his brother changed it and took what happened and…put it into something that benefitted other people,” Pettis said.

Above all, Garry hopes the event will spark conversations across campus.

“I would love to see us as the Millikin community and also the Decatur community be more united and then mindful of the struggles that African Americans are still having in this day in 2022,” Garry said. “I don’t want this to be just a gone-in-the-wind thing where it was a hot topic for one moment and now it goes back to normal. We need to have the sensitive but thought-provoking conversation so that we can really get to lasting change.”

This event is open to students, faculty, staff and invited members of the Decatur community. Students will need to bring their Millikin ID to be admitted.