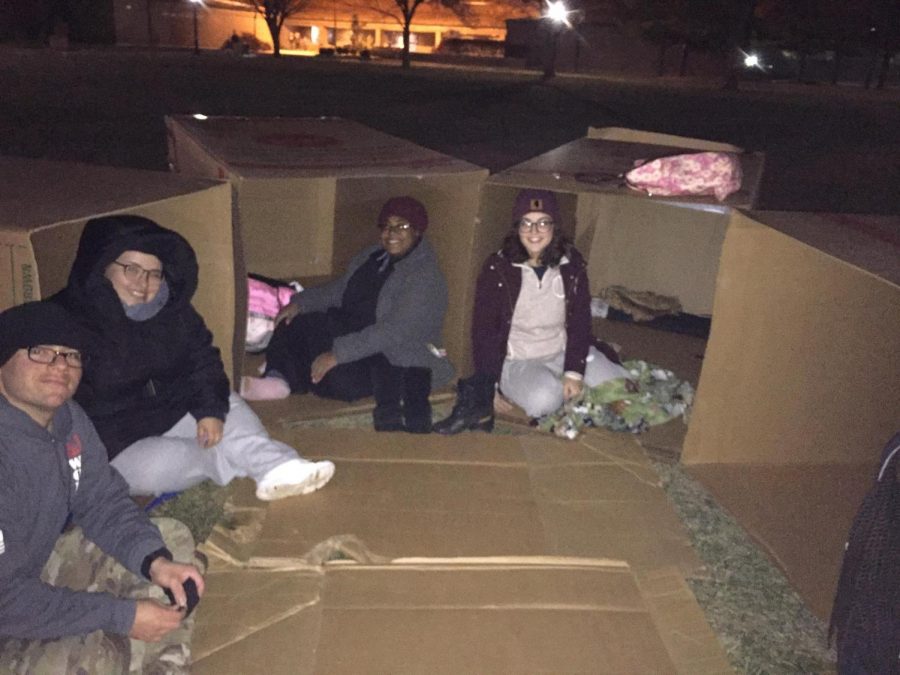 My laptop says it’s 3:15 AM. My phone has run out of battery, and I left my portable charger at home. My computer doesn’t have much battery left, either. When I went to the bathroom, I used the hand dryer to warm myself up. I remembered a scene from the movie “The Day After Tomorrow” where the homeless character stuffs paper in his jacket to warm himself. I did the very same with leftover newspapers I found, because I was in no position to question whether or not this trick would work. I was rocking back and forth, unable to sleep, whimpering, and debating if I should just leave because it was just too much.

I stayed the whole time, and did not sleep much, or even at all.

The 10th Annual Box City Homeless Simulation took place on Miller Quad on November 15th through the 16th, starting at 5:30 PM. and ending at 9:30 AM.

Participants could get a total of 5 service hours for staying the entirety of the event, which included free dinner and breakfast, sleeping in refrigerator boxes on the grass, and a simulation obtaining resources from organizations.

The event was hosted by Mary Garrison, a professor of social work here at Millikin, along with her fellow human services students, such as senior Micheala Wolfman.

“[Box City is] a way to [change] the thinking of our community in the sense that we have more respect for people in different situations,” said Wolfman.

Dinner and breakfast was provided by the Good Samaritan Inn, an organization that provides one free, hot meal a day. Their mission is “to create opportunities with the support of our community toward improving the lives of our economically disadvantaged neighbors through daily nourishment, life skills education, and job training programs,” according to their website.

For dinner, tomato soup, chicken rice, and sandwiches were provided. Participants were encouraged to eat as much as needed and were allowed to bring food from home as well.

After dinner and a few speeches from Garrison, her students, and a woman who was in the Dove Shelter’s Upward Bound program, we were told to go inside Shilling Hall for a simulation. We were all given different scenarios, and our job was to go to each table to get as many resources as we needed.

My scenario was that I was a “22-year old father of a six month old baby.” The mother had died due to a drug overdose, and I had no family to stay with. I also had the issue of family separation, as it was possible my daughter could go into foster care. The only resource I had was money for a one-night hotel stay.

My first instinct was to find food for my child, but I later learned I could find emergency shelter and possibly permanent housing if I could find the right table. However, that table kept switching from one to the other, and I eventually gave up. All of the other students had similar experiences.

When it came time for all of us to sleep outside in boxes, I made the mistake of trusting myself to sleep through the night. I thought to myself, “I don’t think it’s easy, but I’m used to the cold so I at least should be able to be somewhat okay.”

Although I was fine, I could not sleep in the cold. I kept telling myself that eventually I would feel warm enough and doze off, but that never happened. All the clothes I had could not keep me as warm as I thought, and I could not move my box near the fire barrels due to safety concerns.

The sleeping portion ended at 6:00 AM. After cleaning up our boxes, we had to walk about a mile to the Good Samaritan Inn to receive our breakfast, which consisted of cheesed eggs, bacon, sausage, toast, and orange juice. By that time, I barely had any energy to walk and tried not to fall asleep during our discussion with the Good Samaritan Inn members, fellow participants, and Professor Garrison.

Being in the cold is not the same as sleeping in the cold. It is a whole other beast – a beast that many people in the Decatur area face every winter. The conversation during the event was not “get [homeless people] a job” but rather “housing first.” It’s almost impossible to disagree with that notion after going through this simulation.