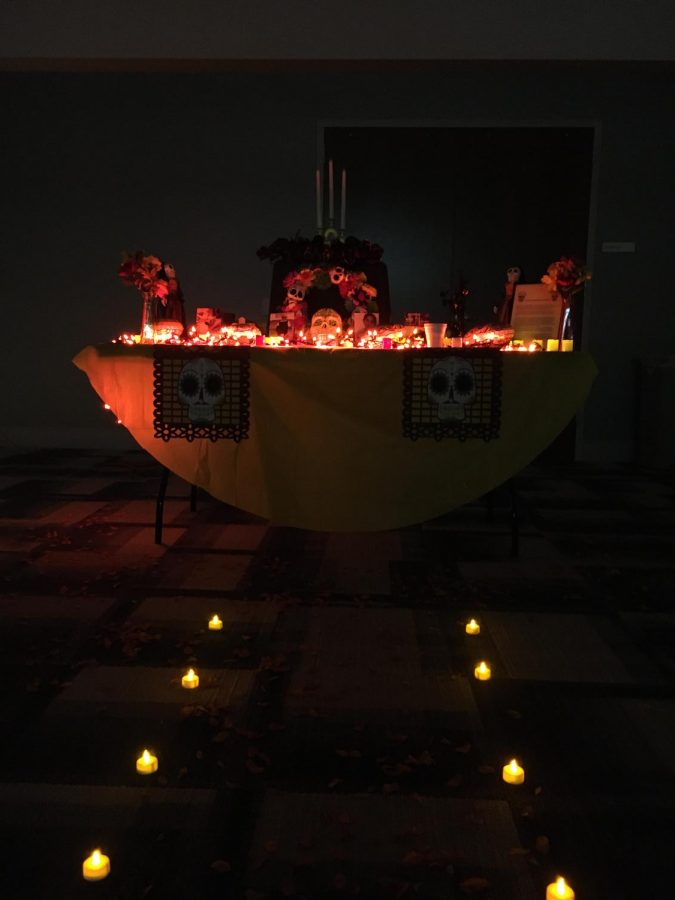 On Nov. 1, 2019, Millikin’s LASO (Latin American Student Organization) left a trail of orange petals beside glowing candles to a gathering place where everyone, living or dead, was welcome. They threw a party in honor of the Day of the Dead, or Dia de los Muertos as they call it in Mexico.

In said country, families honor the lives of their deceased members by throwing parties, parades, dances, and other forms of celebration. They do this to remember their ancestors and celebrate life itself. They give their ofrendas, or offerings, through altars, feasts, dances, songs, jokes, outfits, and spending time with family.

While in America most people think about their dead loved ones in times of mourning, Mexico sees things a little differently. They see death as a celebration of life, and as such, people have a chance to laugh, dance, and live life as if their loved ones were still here on Earth.

For students like freshman Stephanie Munoz, it’s a chance to celebrate the holiday without driving a three-plus-hour journey home.

“It’s a special holiday to me because I celebrate Day of the Dead every year back home with my family,” Munoz said. “Since I don’t have time to drive home, I’m glad that, with LASO, I still get a chance to celebrate it.”

As the party began, the room filled with not only the “Coco” soundtrack but also a few traditional Spanish songs. A few people got up to dance together during “Un Poco Loco.”

Some people wear blouses with flowers on them and long, flowing skirts. A couple LASO members followed in that tradition. One of them explained the wardrobe is common for indigenous people to wear in Mexico. They stressed that it’s important that the only reason people should dress like that to celebrate the Day of the Dead and that reason alone.

A couple people had even painted their faces, so they would represent skeletons.

They had spicy chicken tamales and pan por los muertos, or bread for the dead, for everyone to eat. It’s a circle of bread covered in sugar that can be found at any Mexican bakery, and its texture is close to that of an igloo. Its taste is close to homemade doughnuts.

They had hot chocolate simmering in crock-pots, but they also had cool milk, too.

They even had a cake with a sugar skull drawn on it. Traditionally, some people bake sugar skulls. Unlike usual sugar skulls, which mostly there for decorative purposes, the sugar skull cake was made for eating. By the time the party wrapped up, they had more than enough food to go around.

For the entertainment, they showed the movie “Coco.” Since it was the Day of the Dead, it was only fitting that they would show that. Not only that, but it also brought people together. Some parts made people cry, while other times, they laughed together.

Besides the big altar close to the middle of the room, there were a few smaller altars. The smaller ones had the same candles, cups, and flowers the bigger altar had. One of them had a sign-up sheet, where students could go to get extra credit in their Spanish classes for showing up.

“You can place pictures of your deceased family members or food or whatever you have that reminds you of your loved ones,” LASO member Rubi Rodriguez said. “That way, you can show respect for your loved ones.”

These traditions date back to the days of the Aztecs and other Mexican indigenous peoples. There’s a little European tradition infused in it as well, as Day of the Dead is often celebrated alongside All Saints’ Day and All Souls Day. No matter how it’s celebrated, what’s important is celebrating life together as a community. With students and spirits alike, celebration makes this Day of the Dead party a night to remember.