Coffee With a Cop: Conversation Between Cops and the Community 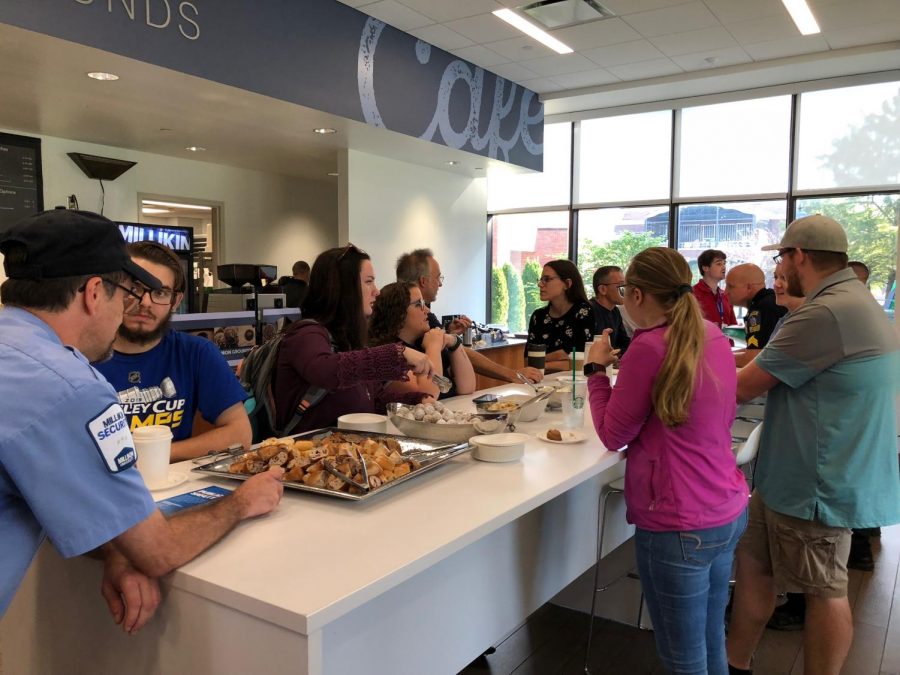 On Wednesday, Oct. 2, Millikin hosted Coffee with a Cop for students and local police officers. Millikin Public Safety partnered with the Decatur Police Department to plan this event.

Oct. 2 is National Coffee with a Cop Day. Millikin’s event, which took place at Common Grounds in the University Commons, was part of an international initiative to promote engagement and trust between community members and local police departments.

“I feel like a lot of people, the only interaction they have with the police is negative,” Z Paul Reynolds, Director of Student Development and the University Commons, said. “This helps counteract that.”

Millikin Public Safety and the Decatur Police Department invited community members to join them and enjoy snacks, coffee, and conversation. People could come to Common Grounds and speak with these officers about anything they wanted to address.

“Getting to know the people, getting to interact with them one-on-one is really unique about being here,” Dave Beasley, Millikin’s Deputy Chief and Assistant Director of Public Safety, said.

This event demonstrated the partnership between Public Safety and the Decatur Police Department. There were several officers from both forces in attendance.

“That partnership goes both ways,” Shane Brandel, Decatur’s Deputy Chief of Police for the Patrol Division, said. “We help them out and they help us out.”

Brandel said that there are less people who apply for the police force today than in previous years. He attributed this to the lifestyle and scrutiny that police officers face.

The Coffee with a Cop initiative started because people wanted to improve the relationship between police officers and the people that they work with. One officer said that she thought the events served as a way to help make people more comfortable around the police.

According to the Coffee With a Cop website, the idea for this event began with local police in Hawthorne, California. These officers met with citizens in neutral locations throughout the community with the hopes of improving relationships between police and community members.

Brandel said that the Decatur police officers are often asked to attend local Coffee with a Cop events. Sometimes, they turn these offers down because the events are so frequent.

Millikin’s event was the first Coffee with a Cop event that the Decatur Police Department has participated in this year.

While Millikin has hosted Coffee with a Cop events in the past, this year marked the first time that Decatur police officers were involved.

“It goes toward this whole concept of community policing,” Reynolds said. “Millikin and Decatur are going with the rest of the country to bring police together and make people realize that they’re there to help.”

Those who want to know more about this initiative can go to coffeewithacop.com to learn more about it and its growth. This website also provides information about upcoming Coffee with a Cop events.