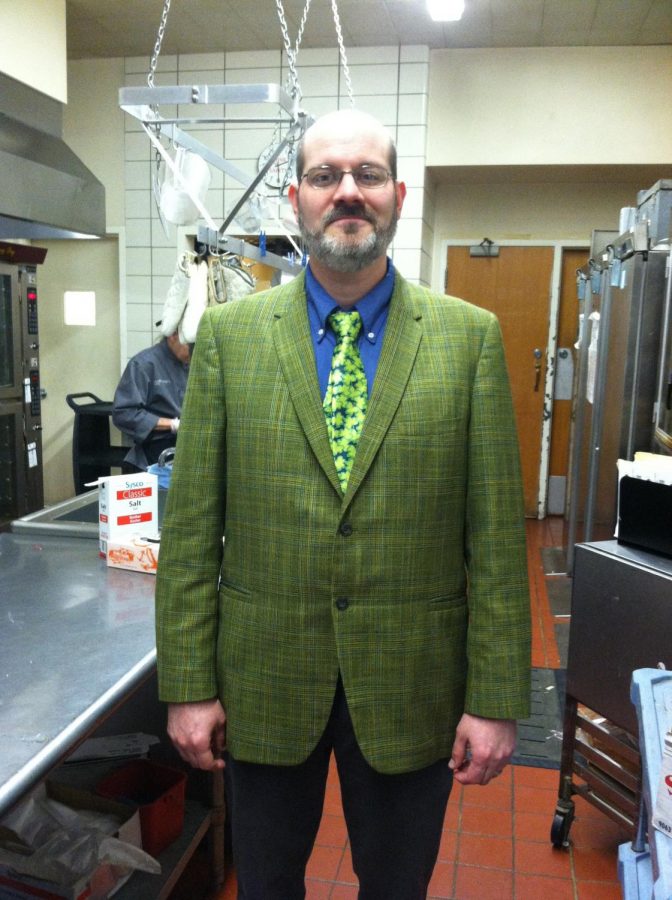 Chad Pramuk impacted everyone he met, and he helped hold Millikin’s community together. His life was full of light, kindness, and love, and his passing on Jan. 13, 2019 was a tragedy.

Chad worked as the retail manager at Millikin. You might have spoken to him at Common Grounds, Einstein’s Bagels, the bookstore, or even the concession stand at basketball and football games. He was known as a man who cared about other people more than anything else. He made a point to check in with others and build genuine connections with those around him.

“Chad made me a better human being,” Chef Brian Pehr said. “If you needed something, no questions asked, he was there. He was such a good guy.”

Chad and Chef Pehr worked closely together, and the two were good friends. They would talk about everything, including their families, politics, and religion. In remembering his friend, Chef Pehr laughed as he told the story of Chad’s crazy socks. At his memorial on Jan. 27, those in attendance even wore crazy socks to pay their respects. Chad took pride in finding the most unique clothing to wear.

“Chad wore the most hideous, godawful, ugly, green sports jacket for St. Patrick’s Day. He was so proud of it,” Chef Pehr said. “Then a few years ago, he got the most godawful green tie to go with it…And once a year, he’d wear it to work, wear it for St. Patrick’s, and then his wife made him put it away, never to be seen again for another 364 days. It was the coolest coat. And he wore it with such pride.”

Chad’s fashion choices often served as fun conversation-starters, and he loved to talk to the people he met and get to know them on a personal level. Dr. Timothy Kovalcik, a history professor and teaching pastor at Westminster Church, remembers how he met Chad at Einstein’s Bagels after he struck up a conversation. The two bonded over their shared interest in the history of baseball, and they soon got to know each other.

“It was amazing to see he knew the names of my kids,” Dr. Kovalcik said. “For such a casual relationship, it was pretty remarkable that he would keep that memory.”

“I would see Chad, who had been on campus as long as I had or longer during the day, and he was helping and handing me my box of popcorn and taking my money and joking with me,” White said. “It’s just such a simple thing because he didn’t have to be that way. He made so many of us feel that he felt that he was lucky to be here, and we felt lucky to be with him.”

If these casual interactions are any indicator, Chad truly cared about the lives of those around them and went out of his way to engage with other people and check in with them. He employed many students in his businesses across campus, and he looked after these workers like they were his own kids.

“At his memorial, I talked about how significant it was that he cared more about other people than he seemed to care about himself,” Dr. Kovalcik said. “The students…were not just his employees, but he cared about where they were going and what they were doing, and he knew who they were years after.”

But nothing meant more to Chad than his family. His wife and two daughters were the most important people in the world.

“He was a huge family man. Everything stopped when it came to that family,” Chef Pehr said. “Anything that family needed, they were first. He was just that good of a guy. Not enough people like that in this world.”

Chad touched the lives of those who were close to him in amazing ways. But maybe even more impressively, he impacted the lives of anyone who came into contact with him, no matter how briefly. Even people who talked to him just a few times can remember him fondly as a kind, caring man who left his mark on everyone he met.

“It was just neat that he had all of these different little spokes out there, that he was able to touch such little individual lives,” Chef Pehr said.

Chad easily and eagerly connected with other people until strangers became friends. From his crazy socks to his genuine investment in the lives of his employees, he was an important member of Millikin’s campus who will be sorely missed.

“Chad was one of those who created the ties which draw us together,” President White explained in his speech that he gave at Chad’s memorial. “In his way of doing his work, his way of being in the world, Chad drew us together; he wrapped us in community.”

Chad’s impact on the people around him is resounding. His genuine kindness toward everyone he came into contact with made the world a more considerate and caring place. Millikin was lucky to have him on our campus, and his life has permanently changed our community.