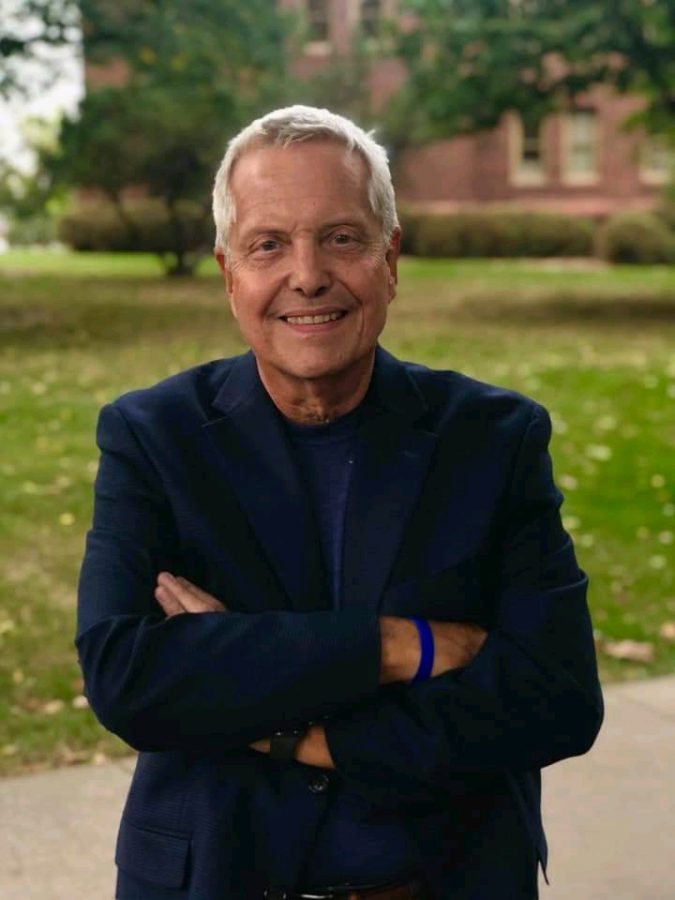 Photo Courtesy of One Voice

Thank you for everything…
By Caleb Kelch
Thirty-five years. How does one come up with a final goodbye that spans thirty-five years? Millikin University lost one of its own and most dedicated faculty members during the first day of the new year. Dr. Stephen Widenhofer or better known as “Doc,” 67, established himself as an optimistic and hard-working educator, a constant innovating jazz and sacred pianist, and an extraordinary human being that possessed a heart of gold.

The entirety of Millikin’s campus and the Decatur community felt sorrow throughout the first few days of the year as a bright light to this area had just been lost. Doc gave every student that walked into the School of Music at Millikin a reason to keep pursuing their dreams and their love for music. With a passion for music and assuring students were fulfilling their potential, Doc became a man full of wisdom, truth, and compassion. Students and fellow performers and educators can all agree that Doc always taught them something no matter how small.

The simple smile that could easily make one’s day, Doc had this charm about him that flowed so well with Millikin and their method of performance learning. Students were given a chance, they were heard, and they became musicians and educators of the future.

As a matter of fact, some of them wound up working for him years later while he served as the Director of the School of Music here at Millikin. Whether it was full circle or simply just a four year stop or a couple of performances alongside him, Doc knew music and he knew how to create it, control it, and persuade it into the minds of the listeners and people around him.

Brian Justison, the current Director of the School of Music, has spoken on behalf of Doc on several occasions. Justison briefly talked about Doc and his legacy as not only a performer, but as an educator as well.

“We all came to know ‘Doc’ through his wonderful musicianship,” Justison said. “In the end, this is how all musicians hope to be remembered. His legacy as an artist transcended the norm, wherein he became an accomplished jazz pianist alongside his passion for sacred music and the organ… He will be sorely missed.”

In his statement, Justison mentions Doc’s ability to surpass and exceed the norm for artists and hints at the accomplishments that he received for being a talented and devoted jazz pianist while always keeping his passion for the organ and sacred music.

“Steve was a great teacher and musician, and Director of the School of Music for many years,” Laura Ledford, the Dean of the College of Fine Arts at Millikin, said in a statement issued via Millikin University. “He led its faculty and students to achieve its mission to nurture ‘the whole musician.’ For Steve, this meant far more than delivering knowledge and technique. It meant teaching us, all of us, to listen; to support each other, to share freely of our gifts, and to honor the power that music has to open our hearts…”

Doc’s arrival on campus was one of the greatest things to ever happen on Millikin’s campus and for the School of Music. His legacy will forever be recognized as one that was filled with passion, education, leading, and music.

News of Doc’s passing broke hearts all over campus, but it’s time to slowly mend the pieces back together and to dedicate the music and further education that is received to a man that believed and heavily pursued the best teaching, leading, and performing for each and every student that walked through the doors of the School of Music.

How does one recognize the countless and endless efforts of a kind-hearted, laid back man that devoted thirty five years to this school? Dr. Stephen Widenhofer worked tirelessly day in, day out to make sure his students and faculty were being taken care of, treated fairly, and receiving the best education that they can possibly receive while also being in a comfortable and relatable environment. “Doc” was more than just a man, but rather a world-class human being with a knack for education and leadership, and a talent for music that impressed everyone who heard him play.

Thank you Doc, for everything. You will be missed and always cherished.
…Your Legacy Will Live On.
By Kathryn Coffey
Over winter break, Millikin University mourned the loss of Dr. Stephen Widenhofer, jazz professor and former director of the School of Music. He passed away on January 1, 2019, at the age of sixty-seven. He is survived by his wife, children, and the many groups he helped to create on campus.

Dr. Widenhofer served proficiently in inspiring hundreds of students at Millikin for close to thirty-six years. He is known for establishing Millikin’s Vocal Jazz program in 1986 as well as teaching various classes at the Perkinson Music Center or PMC.

Perhaps Dr. Widenhofer’s most well-known contribution to Vocal Jazz is OneVoice, one of the most prestigious choirs on campus. Over the years, this group has been making Millikin proud with accolades and outstanding performances.

Last year, the choir raised money to take a spring-break trip to Santiago, Chile. Some students may remember their fundraiser “Chili for Chile,” where the choir performed and had a variety of homemade chili for anyone who wanted to show support. On their Facebook page, they kept fans up-to-date, and it appeared to have a good time had by all, memories sure to be cherished for a lifetime.

Dr. Widenhofer is irreplaceable to Millikin’s music community. However, no matter what the outcome of finding someone to take the reins of Millikin’s Jazz program might be, one thing is certain: his spirit will live on in the students lucky enough to experience him as a teacher and the groups he made.

The impact of his loss can be found in more than in the PMC, it can also be found on the stage. The University Choir’s January homecoming concert had a memorial section of the concert was originally dedicated to the late Kathryne Hoffman, one of the choir’s founders. However, with the addition of Widenhofer’s passing, now there were two people to honor that day.

As someone who never had him as a professor but would see him from time to time at the benches in the PMC, I can safely say hanging around is not going to be the same without seeing him. And even ignoring that, I’m going to miss his killer piano solos during OneVoice performances.

For some students, especially for those who worked with him, it hit a little closer to home. A few of them were even close to crying when Dr. Brad Holmes mentioned his name.

As they sang, the emotional weight made every song sound grander than they already were. They were singing for an old friend who touched their lives and made it better. Among all the angels who came to hear the choir sing, Dr. Widenhofer surely was chief among them.

On January 24th, 2019, OneVoice got to perform in Peoria for the Illinois Music Educator All-State’s conference in Dr. Widenhofer’s memory. They were presented a plaque as a token of appreciation, and they sang their hearts out for him. It was a night of healing and love for all involved.

Dr. Widenhoffer was more than a Millikin professor, he was a man who brought joy and happiness to whoever had the pleasure of working with him.

As OneVoice said on their Facebook post on January 2, “We continue to sing for you and with you, Doc. Thank you for sharing your intelligence, your gifts, and your beautiful soul.”

May he forever rest in peace, and may we remember him always.