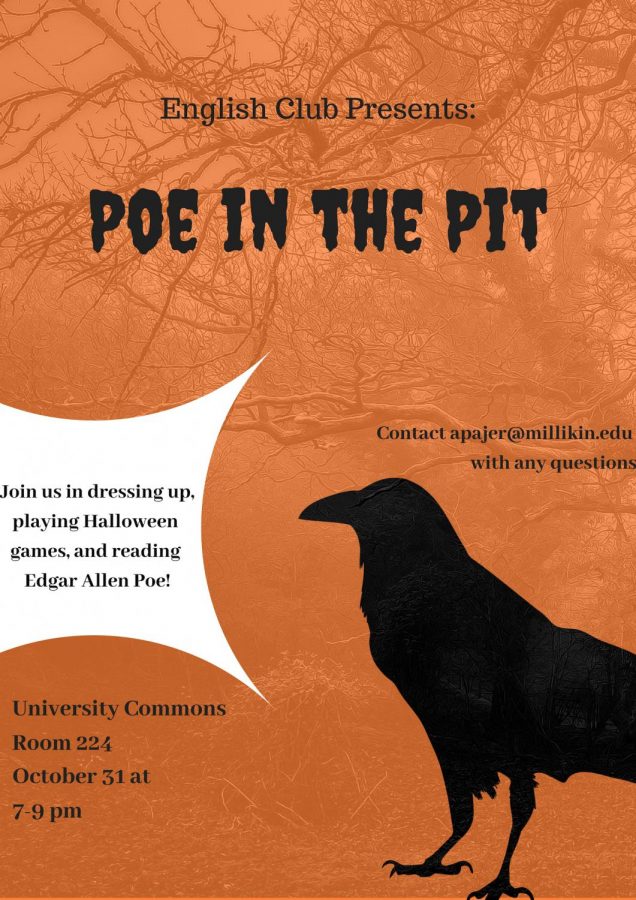 Millikin’s English Club will host their annual Poe in the Pit celebration on Wednesday, Oct. 31, 2018. The event will occur from 7-9 PM on Halloween night in the University Commons.

This event features readings of spooky literature. Students can read original works or excerpts of horror or mystery stories. The poetry and short stories of author Edgar Allen Poe are especially celebrated during this event.

“Poe in the Pit is one of my favorite parts of the Millikin English discipline,” Athena Pajer, English Club president, said. “Everybody in the English department and all the English students have a soft spot in their heart for Poe.”

Edgar Allen Poe was a mystery writer and forefather of the horror genre. His poetry and short stories are widely respected. This event celebrates his life and his contribution to the literary world.

“Everybody loves Edgar Allen Poe for some reason. They like the spookiness at this time of the year around Halloween, and they like the horror stories,” English professor Dr. Michael O’Conner, an advisor to English Club, said. “There’s been an explosion of the appreciation of the horror genre in the last fifty years. We’ve seen that especially in movies and television…People can trace a lot of things going on in horror movies all the way back to Poe. They sort of bow in respect to the study of horror through recognizing Edgar Allen Poe.”

This event also celebrates authors who write in styles similar to Poe or who have drawn inspiration from him. In addition to Poe, mystery and horror writers like Nathaniel Hawthorne and Stephen King are recognized. Students who have been inspired by Poe can also read their original pieces at Poe in the Pit.

This year, Poe in the Pit will take place in the University Commons on Halloween. There will be refreshments and Halloween candy as well as trivia games.

Poe in the Pit is an annual tradition for English Club. In the past, it has been held in a local cemetery. Following this, the reading was held in the basement of Staley Library. The event gained its name because it was located in a sunken garden behind the library. This name also alludes to “The Pit and the Pendulum,” a short story by Poe. When Millikin built the University Commons, the location changed again, but the name has stuck. This year, the reading will be held in the University Commons for the second year in a row.

“This has been a long-standing event. We’ve been doing this as long as I’ve been here, which is 22 years,” Dr. O’Conner said. “So it’s something that’s been part of Millikin for a long time.”

Students are encouraged to attend the event and listen to the readings. There will be a sign-up sheet for students who want to sign up to read. Students who wish to read an original piece or excerpt of a story should contact Athena Pajer.

“We hope to make Poe in the Pit something that anybody can come to for some spooky, clean fun,” Pajer said. “It’s always just been fun, goofing around, and geeking out about spooky literature.”

Millikin’s English Club holds meetings every Wednesday night at 7 PM in the University Commons. Students who want to join English Club can talk to Pajer, Dr. O’Conner, or Alex Johnson, the vice president of English Club. Poe in the Pit is a Millikin tradition sponsored by English Club. English Club will be planning many other activities throughout the year.