Milllipalooza: An Event to Kick off the Year

With special guests Telephone and Chocolate in Your Pocket 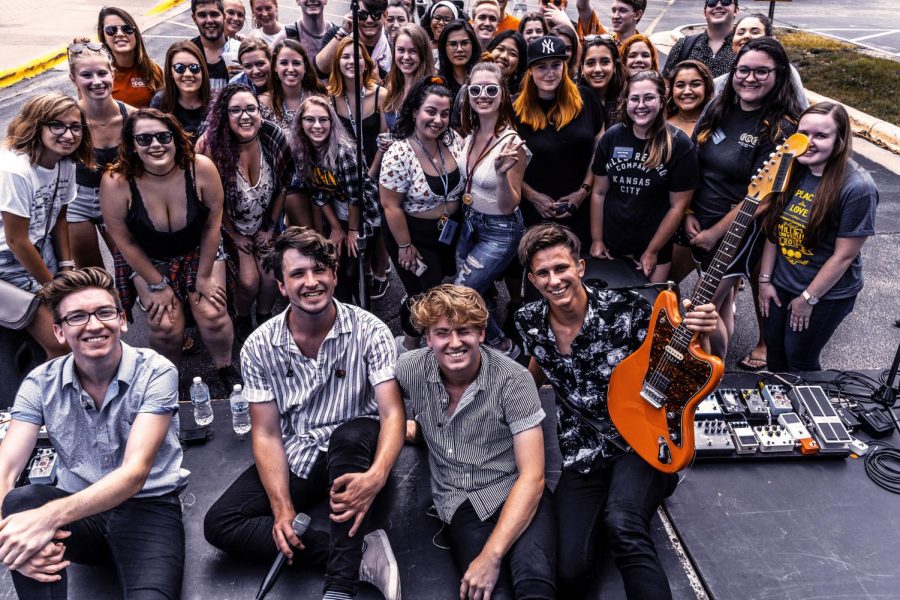 Telephone (below) pictured with MU students after playing at MIllipalooza

It wouldn’t be the beginning of another Millikin year without Millipalooza. This year as Millikin goes through an abundance of changes, this annual event had one of its own that took an immediate notice: location.

Each year the Quad is usually the place for outside activities, and is literally the center of Milliken’s attention, but this year the big Millikin based festival was relocated to right behind the University Commons, and stretched back to the parking lot of Kirkland Theatre.

The threat of bad weather did not push Millikin students to do anything but plan even more besides the many activities going on, to make sure that this event was put on to the best of their ability.

Bailey Hope, a member of the University Board that puts on campus wide events like this every year was one of the coordinators for Millipalooza this year.

“One of the biggest challenges was moving from the Quad. It was a lot of ‘day-of’ relocating, but we had teamwork and working together. We got it done!”

But the relocation did not slow down the day festivities. Inflated water slides, ice cream and taco bars, and a stage filled with live artist occupied the whole campus from 12- 4.

Student members of UCB always run Millipalooza, so naturally there can be some obstacles along the way, but with the different committees and backup plans to the back up plans. It didn’t slow them down.

People of all different nationalities and ages took part in games of bags, and the free food on the hot Saturday afternoon.

Several Millikin based performers were set to take the stage, from soulful singer Aly Gabriel and band Chocolate in Your Pocket. This year’s performers were even more diverse as the coordinators this year were able to book a special performance by Telephone, a four-member indie/pop band that traveled all the way from Oklahoma to play for our campus.

They played all originals, from songs just released last year, to their very first single. Although the music was new to most of the people attending, they definitely put on an exciting show, with impressive live vocals, and an on point crowd interaction.

The water slide attracted those who wanted to find a fun way to escape the heat, and a lot of amusement was brought to onlookers as those fully clothed flew down the gigantic slide.

This is the first of many events put on by the University Center Board, with many more to come!

Any campus wide events will most likely be put on by the long-standing student organization, and if that’s something that excites you, they are looking for new members.

From incoming freshmen, transfers, and all Millikin students: if you like to take part in planning our oncoming Homecoming Events, including the talent show, and other events coming up this year, then UCB is the club to be in.