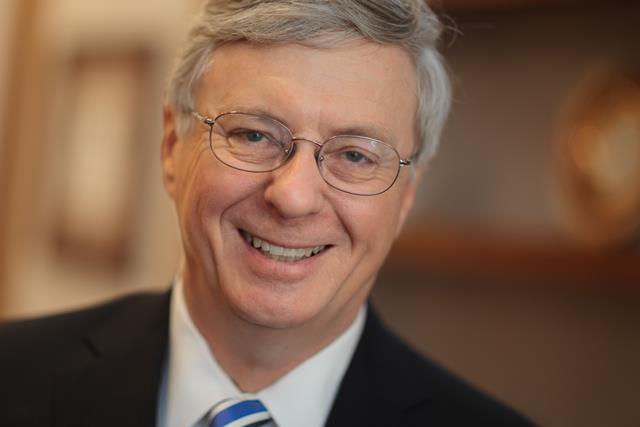 Last week, the Board of Trustees elected interim president Dr. Patrick White to remain at the institution and assume the role of Millikin’s fifteenth president. White was originally planned to be in office for 12-18 months while a national search was conducted to find the university’s next president.

“The board felt that Dr. White had demonstrated excellent leadership during his first 90 days as the interim president, and he would continue to be a very good leader for Millikin,” said Van Dukeman, chairman of the board. “We also felt that Dr. White never “acted like an interim,” and desired to stay longer to help lead Millikin over the next several years.  The board could not be happier with this outcome.”

White says he is happy to take on the position and is in it for the long run. He has discovered a newfound love for Millikin.

“I fall in love with institutions easily,” he said. “Millikin is loveable even though it sometimes seems kind of hard to get to know or care about. Certainly a lot of people love it. Also, you can love a place even though it will disappoint you and break your heart. One of the things I love about Millikin is the talent of students – the willingness to work, the work ethic and the creativity. Faculty is working very hard and ready to take on a new task and opportunity to support our students and the institution. There is a sense of community and I like that.”

When White was interviewed, it was explicitly stated that he would be stepping into an interim position. Although he wasn’t looking for a one year gig, White knew he would fall in love with the campus. He was also told that the best way to be a good interim president was by not acting like an interim.

“I would think about things in a long term impact,” he said. “I was honestly becoming more comfortable in the interim role.”

As time went on, White wasn’t hearing any more talk about the presidential search which made him concerned. Then over the last couple of weeks, White was in discussion about taking on the full time position. This made him question not only if this was a good choice for him and his family, but if he was right person for Millikin at this moment.

“Many people seemed to think I was,” he said. “I had to really think about this quite a bit because it’s a big job. I have really grown to like Millikin a lot and I see some real strengths in the university we are not giving ourselves credit for a lot of the time. I look forward to bring that out and our understanding of who we are as Millikin over the next few years.

“If you know you’re only going to be here for a year, certain problems will not be addressed or solved. It feels good to have a bigger role in some of the more pressing issues the university is facing, but I’m also going to have to actually have to complete some of these concerns. I’m not going to be walking out the door in a handful of months.  Most of the time, I didn’t feel like people were treating me like an interim. I would go deeper into issues that needed to be addressed.”

White hopes that there will be collaboration between staff, faculty and students to work hard and move Millikin forward. He sees a lot of possibilities and wants to be involved.

“I said to the board that I’m not a turn-around artist,” he said. “I want to build Millikin to a level of greatness. It’s not going to be easy and there are some real challenges ahead. I didn’t come in with a magic wand to fix things, but I am coming in with a lot of experience and a willingness to work my head off. One of my beliefs is that universities and colleges often misname their excellence. We have to start talking about performance learning that will resonate for people. So, I’m kind of fired up. I was in for the long run as interim; I’m in for the long run now as president.”

“I like the complex work of being a university president. There are few jobs like it and I get to work with all kinds of diverse people. I’m certainly not the most knowledgeable person in the room, but I get to see things from another angle and that’s what a good teacher and president does. Let’s think of it this way – we got to find a way to rise to our best imagination of what Millikin can be. We haven’t been doing that in recent months. There is something enormously exciting out there, and we need to find ways to get thrilled about that. Millikin has an awful lot going for it.”

As word spread around campus, there have been many positive comments from students and faculty. In regards to faculty having a role in the decision making, White said they were informally consulted. He does not believe that there was a formal body consultant.

Dean of Arts and Sciences Dr. Randy Brooks said, “It has been a pleasure to work with Dr. White since he started in July, and I am pleased that he has been elected to become Millikin’s fifteenth president.”

“Dr. White was the Dean of Faculty at Saint Mary’s College in Notre Dame, Ind. where my mother has taught psychology for over 20 years, she said. “When I told my mother he was the interim president over the summer, she remembered him immediately and raved about all the tremendous things he did for Saint Mary’s College, how he was a great advocate for the students and how she hoped he would become the permanent president here at Millikin. I had a similar hope after being reintroduced to him as a college student and no longer a young toddler. He is extremely friendly and is more than willing to stop and talk to students around campus. So, next time you see him, make sure to say hello. We are very lucky to have him.”

Even though White was an interim, he had all the rights and responsibilities as a full time president. His work last week is the same this week. Some of his top priorities include strengthening the Millikin experience, confronting the current budget issues and searching for a Vice President of Academic Affairs. White has been taking on that position as well and he hopes to begin the search as soon as possible. He expects the position to be filled no later than this summer so they can begin the 2014-2015 school year.