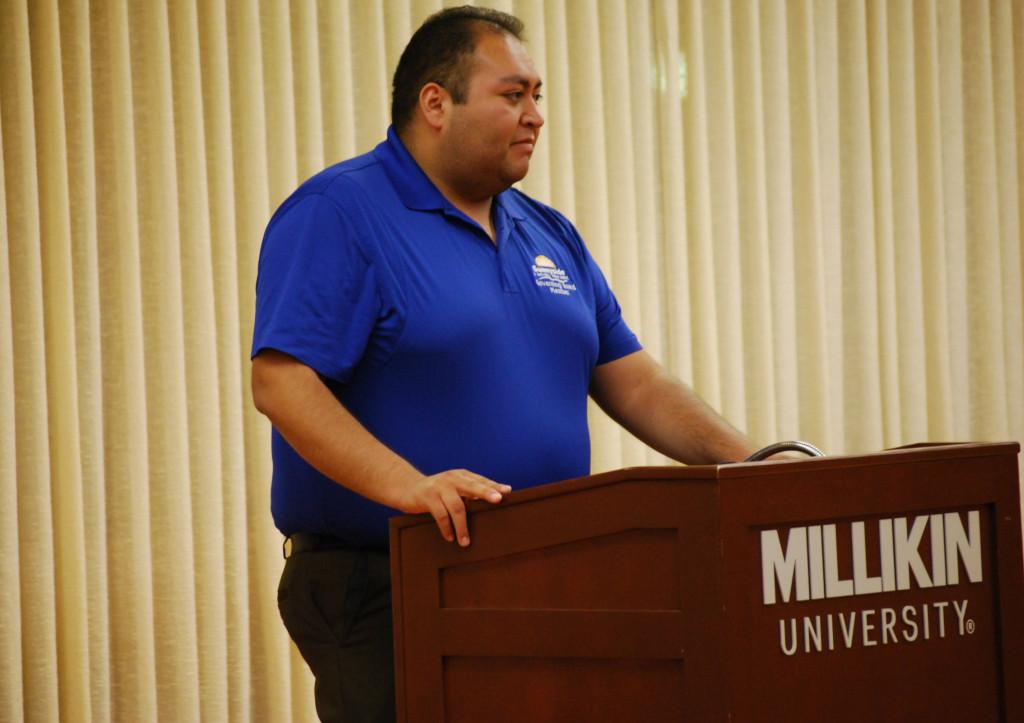 In honor of Hispanic Heritage Month, the Office of Inclusion and Student Engagement invited Tucson, Ariz. native and political advocate Daniel Hernandez Jr. to speak at Millikin. Hernandez, a 2012 graduate from the University of Arizona, talked about what it was like being a first generation college student, discovering his love for politics and working with Congresswoman Gabrielle Giffords.

On Jan. 8, 2011, Giffords and 18 other people were shot at a constituent event in Tucson. At that time, Hernandez was a congressional intern and witnessed the chaos.

“I noticed Gabby was on the floor and she was asphyxiating,” he said. “There was one shot wound above her left eyebrow. I was trying to communicate with her and keep her calm. When one has a brain injury, you need to keep them alert and engaged.”

Before going into politics, Hernandez wanted to be a nursing assistant. At the age of five, he was rushed to the emergency room and the doctor who assisted him offered to show him around the hospital. That was the moment he knew he wanted to go into the medical field. He wanted to help people.

However, many school administrators did not believe that Hernandez would make it. He was determined to show them wrong.

“Many were telling me it was okay to drop out,” he said.

In 2007, Hernandez volunteered to help with the Hillary Clinton campaign. After being focused on going to medical school for 13-14 years, he says that it was weird to get involved in politics.

“Even though it was miserable to lose the campaign, I enjoyed working on it,” he said. “But I didn’t want to do politics again.”

That decision changed two days later when he was asked to volunteer for an event in support for Giffords, who was running for re-election.

“I didn’t want to do it, but I did,” he said. “Ten minutes in, I knew I wanted to work for her. She seemed like she cared about people.  I thought the way to help people was through medical care. To this day, she is someone who continues to be a really great source of inspiration and compassion. She is someone who reflects my values well.”

Hernandez then decided to sign up for an internship and started to build a good relationship with Giffords throughout the 2008 election. After Giffords won and Hernandez’s internship was over, the two remained in touch. He says that she made him question what he wanted to do in life and encouraged him to look into advocacy; to help those who don’t have a voice.

During his junior year, Hernandez decided he no longer wanted to be in the medical field.

“Politics and advocacy is the path I want to go on to impact people’s lives,” he said.

To start off his career change, Hernandez ran a non-profit political student organization. This is when he passed his first piece of legislation.

“The legislation allowed students to be excused from classes for three hours so they can go vote,” he said. “The university was also required to fund voter registration drives.”

Hernandez recalls that there was a lot of tension and anger throughout the 2010 election. There was a sense of dread. On a brighter note, Giffords asked him if he would like to intern on her official team and work directly with constituents. Unfortunately, the mass shooting was basically toward the beginning of his internship.

Hernandez had to make a choice: take down the gunman or help the victims. Due to his medical training, he took action to help those who were wounded. The question as to why the shooter, Jared Loughner, targeted Giffords is still unclear.

“I think being in the public eye, there is going to be negative attention,” he said. “Some choose high profiled people. I’ve gotten threats of my own. When someone puts themselves out on the line to make themself visible and heard, the results aren’t going to be the same. Not everyone is going to like you. No one knows why Jared’s obsession was fixated on her.”

While Giffords was being transported to the hospital, Hernandez remained by her side. Before making any phone calls to his own family, Hernandez posted on Twitter that Giffords was still alive. Numerous media reports had said that the Congresswoman died.

Two years have passed and Hernandez says that Giffords has made a miraculous recovery – she is still the same person.

“Gabby sent me on the right path,” he said. “If you don’t like something, do something else. Find what you’re passionate about. Public service isn’t done in one way.”

In November 2011, Hernandez was elected to Sunnyside Unified School District’s school board in Tucson. He is up for re-election in 2014 unless he is recalled in which he will have to defend his seat this upcoming April or May. At the time of his election, he was known as the youngest LGBT elected official in the country. One of his projects is working towards an employment nondiscrimination act in Arizona.

“I sometimes have to remember all that I’ve done,” he said. “For me, I want to take every opportunity and never say no. I have all these wonderful experiences. I can look back and say I did a lot. It’s hard to believe I’m only 23.”

“What I liked the most was the wrap up and the way he wanted to help people no matter what,” he said. “Politics became an outlet and he stayed open minded to find that in life. If I captured anything from that . . . be you and don’t miss out on experiences. He’s a fantastic person to listen to.”