Joe Sorenson Takes to the Mainstage 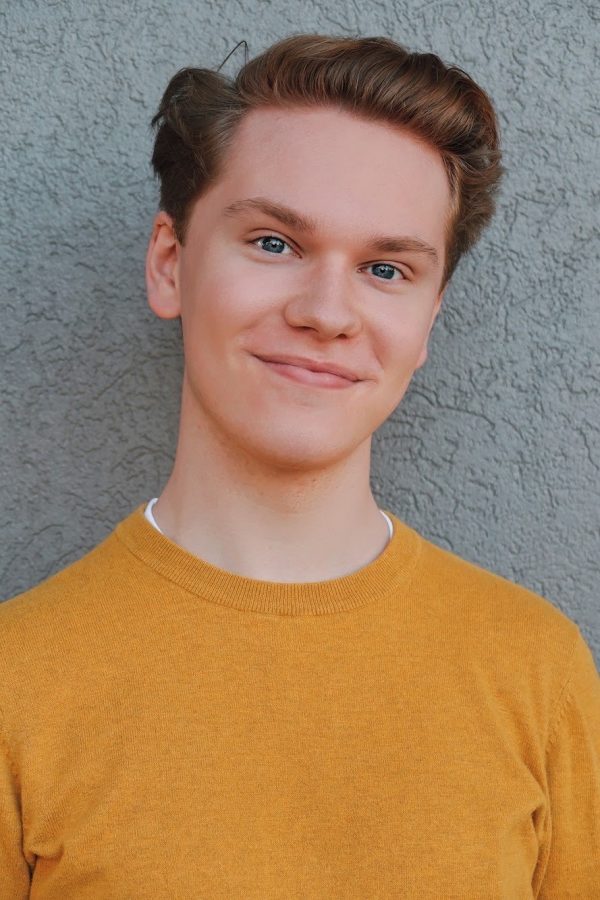 It is rare for Millikin freshmen to be cast in a lead role in mainstage productions their freshman year. It has also been rare for in-person events to happen since COVID-19 hit roughly a year ago. But freshman Joe Sorenson is about to have the best of both worlds as he prepares to start rehearsals for Millikin’s outdoor, in-person production of Pete(Her) Pan.

Sorenson is a musical theater major candidate from the suburbs of Minnesota (near St. Paul, but also near Minneapolis, he said). For him, musical theater was not always his dream.

“I started theater kind of late-ish,” Sorenson said. “I started doing theater in the eighth grade and then I didn’t start doing it actively until freshman year. And I didn’t really expect that that was what I was going to be going to college for.”

Sorenson explained that once an older friend of his from high school started looking at theater schools, he realized that he could follow that path as well.

This realization started his college search for musical theater programs. While Millikin’s School of Theatre and Dance is nationally recognized, it is a big contrast from other major theater programs at larger schools or larger cities. Sorenson debated back and forth between a city school and Millikin. In the end, Sorenson made the right decision for him.

“I’m realizing this was where I wanted to be,” Sorenson said.

Sorenson, like many other students, has become a fan of the smaller class sizes and the professor-to-student ratio.

“Especially for musical theater, it’s like you’ve got the same people in each class,” Sorenson said. “So it’s really nice to build that community of people.”

While Sorenson has been able to connect with the other students in his theater classes, COVID-19 has deeply affected the rest of his Millikin freshman experience.

“There’s almost a disconnect of this is everything that has happened and it’s not happening, but it’s like, I miss it, but I didn’t ever experience it in the first place,” Sorenson said.

Not only has it been hard to make connections and friendships with peers during the pandemic, but it’s also made it hard to recognize those around us.

“Coming here and the atmosphere being like ‘half-faces’ just from the get-go is really weird,” Sorenson said. “It’s gonna be weird transitioning to when you don’t need masks anymore. And it’s gonna be like, ‘I don’t know who this is.’”

Sorenson explained that he is doing what he can to be involved with campus and get to know more people. This past weekend, he became a part of the Greek Life community by joining the fraternity, Sigma Alpha Epsilon.

“I definitely want to get to that place again where I feel comfortable enough walking up to people and just saying hi, as kind of cheesy as that sounds,” Sorenson said.

Being cast in a mainstage production is another way that Sorenson has made more connections on campus. In January, Sorenson found out that he was cast as Smee in Millikin’s production of Pete(Her) Pan.

“I can’t lie, I was very surprised,” Sorenson said in regards to how he felt learning about the callback.

He also explained that Smee was the only character callback that did not have to sing, so he was honored that the professors and directors saw him as that role through his acting. After the callback, for many students, including Sorenson, it was a moment of anxiety. At that time, casting was taking place for both the musical Pete(Her) Pan and “She Kills Monsters,” a play that took place on Zoom a few weekends ago.

Sorenson’s cast mate, junior student Julia Budd who will be playing the infamous Captain Hook in Pete(Her) Pan, was excited to work with Sorenson from the minute she saw the cast list.

“Joe is so passionate and excited to dive into his role,” Budd said. “I can’t wait to see what he brings to life throughout the rehearsal process.”

While he landed a major role, Sorenson said he would have wanted to participate in the production as it will be the first live theater performance Millikin has had since the start of the pandemic. Pete(Her) Pan will be taking place April 29-May 2 on the North Lawn of the new Center for Theatre and Dance.

“Regardless of what show it was, I would just like to be a part of it,” Sorenson said, referring to how he felt before knowing he was cast as Smee.

According to Sorenson, the musical will be performed live with cast, crew, and audience members wearing masks. Sorenson explained there will be special masks worn specifically made for musical and acting performance. The requirement of wearing a mask has not deterred Sorenson at all.

“Which, I mean, I’m fine with,” Sorenson said. “Performing is performing.”

Rehearsals for Pete(Her) Pan start on March 22nd, and cast members are getting excited to jump in.

“This pandemic has brought many new challenges to performing, and I am so grateful to the opportunity to safely work with people like Joe,” Budd said.

For Sorenson, this is just the beginning of his Millikin career. His freshman year will be remembered by his casting and performance in Pete(Her) Pan. There is no denying that Sorenson is starting his time at Millikin with a bang. It will be exciting to see him make the most of his time and Millikin and continue doing what he loves.