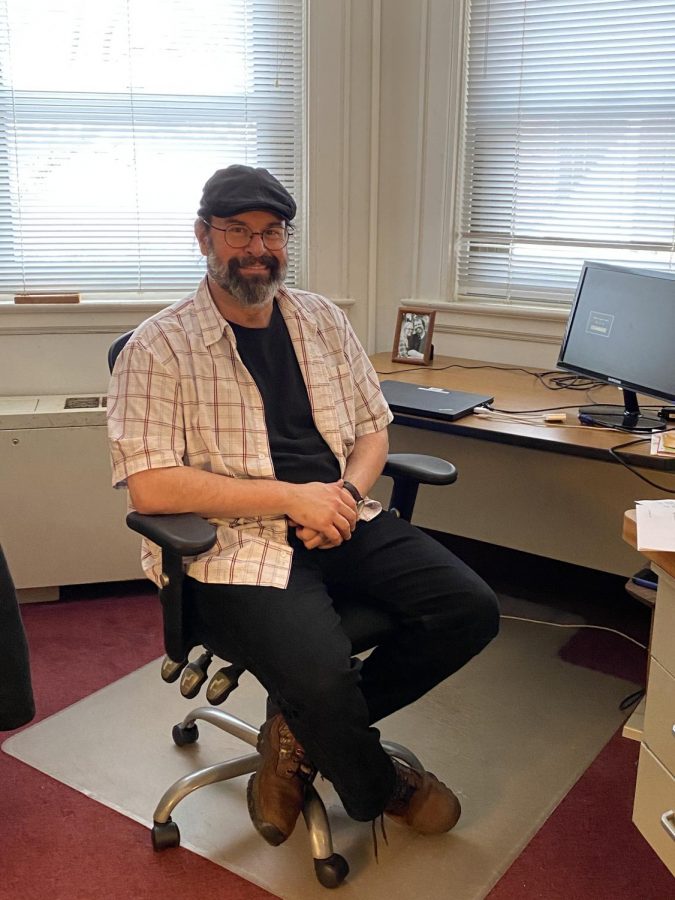 Dr. Michael Hollis-George is a man of many titles, including husband, professor, and musician. Now, he has a new one: Dad. He now has a son, Orion, and he loves him, and that’s based on how his computer background is always a picture of Orion.

Some may describe Hollis-George as Heavy Metal Santa, but he’d argue that Rock N’ Roll Santa is more his speed. He even mentioned a Facebook look-alike quiz where it said that he looked like Bob Seger. He’s got plans for Christmas now that he has a kid.

“I don’t jiggle like a bowl full of jelly when I laugh yet,” Hollis-George said. “Now that I have a kid, I’m waiting for my beard to go all white so I can play Santa on Christmas.”

Hollis-George is an anomaly because he describes himself as being an introvert and a loner. This may not seem to be the case to the students who have him in class and see how energetic he is. Hollis-George has gone through a lot, but he also has a lot more to experience.

He talks about having some of his father’s old records, and he still listens to them. He lost his father at twenty-one years old, and it hit him because that’s where his love of music came from. His father always had music playing in the house, blasting so loud the neighbors across the road heard it.

“Yeah, it was because he got it started, and when I formed a really solid core group of friends in sixth grade, that’s when we started doing more,” Hollis-George said. “When you have the record in front of you, you got the track list, and you got who’s doing what and who’s engineering it.

“You’ve got who’s producing it, you learn a lot about sort of the sound you like, but there’s not a lot of time to do that anymore. We used to just sit and listen while we were looking at the album cover. So, yeah, very nostalgic.”

He’s following in his father’s footsteps, in a way, because he has music playing all the time. Orion’s surroundings always include music in one way, shape, or form. Hollis-George even plans to teach his son how to play the guitar when he gets older, but he won’t teach any other lessons.

Both Hollis-George and his wife, Jacqueline, have always had music surrounding them. Having music on for Orion is a mutual decision, no doubt one of many in concern to him. Hollis-George has a special bond forming with Orion, and it’s a sight to see for Jacqueline.

“I never had any doubt that he was going to be a good father,” Jacqueline said. “I mean, he’s very loving and supportive, but I don’t know that nurturing would be something I’d say that he is or think that immediately.

“That’s really sort of surprised me because that’s been something that I’ve seen kind of grow and really flower in him since the baby’s been born. It’s been really cool to watch their bond because he’s definitely not a kid person, never was.”

Hollis-George is now a family man, and that’s caused a lot of changes in his life that he never expected. His partners in the past never wanted kids. Even when he got with Jacqueline, kids were not on the table at first. Jacqueline was the one that pushed for a baby, and Hollis-George hopped on board, a bit unsure of the idea.

Hollis-George went through a lot with the loss of his third wife, Priscilla. This event put Hollis-George into a dark place that he didn’t realize he was in until he got with Jacqueline. Even then, it wasn’t noticeable to him but to the people around him.

Priscilla, Dr. Scott Lambert’s predecessor as the journalism teacher, passed on Christmas Day in 2014. She suffered a stroke, and the loss changed Hollis-George.

“Oh my goodness, I’ve seen Mike go through a few changes,” Dr. Anne Matthews, one of Millikin’s English professors, said. “When I first got here, he was kind of an angry guy. Very bristly and prickly and quick to get angry.

“Going to London, and being with Priscilla, I think, really sort of settled him down. When he came back from London especially, he seemed calm and he acknowledged that.

“Seeing him with Jacqueline…This is the third Mike that I know and he’s happy, and he’s, I think, thrilled to be a dad. I don’t think I’ve ever seen Mike smile as much as he has over the past several years.”

He threw himself into his work. He was still there for the students, but he was closed off. He lost himself in despair, and he had no one because Priscilla was his family; the rest of his family was in Ohio. The positive change in Hollis-George could have come from Jacqueline, but it also could have come from this side that she brought out of him.

He changed a lot, going from being happy and laughing to a bit broody and moody. He admits that he was not his best self during this time, but that’s something that people can’t judge.

“I think it was less about me changing him and more about just summoning these things that were already in him that was just pushed down by something that was really traumatic and sad,” Jacqueline said.

Now that Orion has been born, they focus on their relationship even more. They’ve focused on being all-in.

They sit and get lost in tangents of conversations that range from television shows to music, and these conversations could last for hours. They did this when they first started dating, and they still do it now whenever they can.

“We have conversations that specifically and purposely don’t have anything to do with work or with him,” Jacqueline said. “Usually on Friday nights, we put [Orion] to bed, and he’s a really good sleeper, so he’s asleep for the night by ten for sure. So, we kind of put the TV on and then we end up just pausing it because we get lost in these sort of side conversations that turn into tangents.”

Their love may not seem conventional, as she was once in his class, and they have an age gap that might concern people. They fell for each other after being in a band together, and she didn’t join until after she graduated. Jacqueline and Hollis-George have helped each other through many bad experiences.

Hollis-George has been in several bands over the years, but this is one he shares with his wife. This band has gone from having people step in and out to now being almost a family band. Jaqueline, Hollis-George, Ed, Jacqueline’s father, and Steve, a farmer, are in the band.

“Which occurred in fall of 2012, I was in England and not in a band, so that was spring of 2013,” Hollis-George said. “I saw a Craigslist ad, this guy was a bass player, and he was looking to form a punk band. I contacted him, and in the meantime, I was with the old band, and I had acquired three more guitars.”

Hollis-George plays the guitar; he started when he got his first guitar in 1982. His first guitar was an electric guitar, and he took some lessons with it. That he is an English professor with a love for music is entertaining because he wanted to be a DJ at first.

Hollis-George likes soft-rock, rock n roll, and blues music a lot now. His music tastes used to revolve around what his dad listened to or what he listened to as a kid. He listened to ACDC and The Doors before, but in the house, he plays soft rock music on the TV.

His love of music started with his father, and Orion’s love of music is going to begin with his parents, too. It’s funny how life can open these ideas up in someone’s mind. He went from not wanting a kid to loving Orion with his whole being and wanting to show him off.

“I was not domesticated at all before I was with him,” Jacqueline said. “I was not a hundred percent set on the whole idea of marriage, I did not want to have a child, but it’s funny. Even though I didn’t necessarily dream about these things before they happened, it kind of happened organically in our relationship.”

Jacqueline wanted to have a baby, and Hollis-George followed along, a bit apprehensive of it. Hollis-George pushed for marriage, and Jacqueline hopped on board rather quickly. There is no feeling of sacrifice in these decisions because they made them together.

Hollis-George is a man who loves the family that he has, though he’s a lone wolf. He is still ever-changing, but his love of music and the effect it has on him will not change. Music, family, and a nostalgic feeling that some may not find has settled itself in his house, his heart, and his mind.