Plumber to Provost: How a First-Generation College Student Became the Academic Face of a University 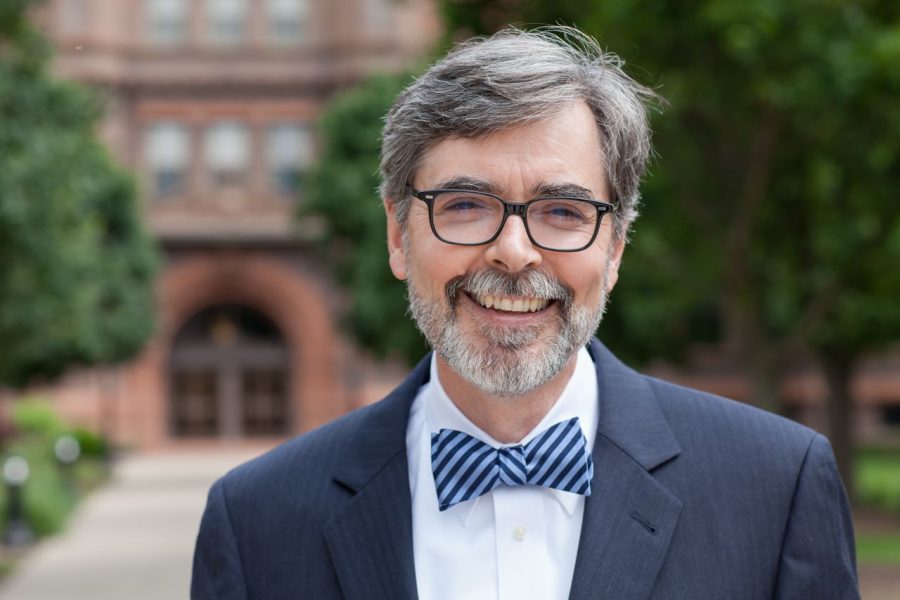 Jefferey Aper wandered the sidewalks around Blackburn College and contemplated his future. As a senior in college, he had no idea what career path he would choose. Feeling lost and looking for guidance, he confided in his girlfriend as they walked hand-in-hand on the campus where they first met.

A young Dr. Aper looked at his future wife, Sandy, and without hesitation said, “Well, I’d like to be academic dean at a place like this.”

He glanced at her, shook his head, and said, “That’s ridiculous.”

“Jeff and I met in college when we were only 18 and 19, but I knew immediately that he was exceptional,” said Sandy, “He was incredibly smart, funny, kind, and handsome—and he was completely clueless about it!”

Aper thought he did not want to put in the time and work that it took to have a job like that. He would have to get multiple degrees and he had no plans to go back to school for those. To him, that job was an unachievable dream.

Little did Dr. Aper know that 41 years later that is exactly what he would be doing. After bumping around from job to job, Dr. Aper managed to achieve the goal he never thought he would.

“It sounds kind of corny, but this is the work I was born to do. I can’t think of a job that would match my ability, my interests, my inclinations better than what I do now,” said Aper.

Dr. Aper’s life reads like a choose your own adventure book. Every choice brought him to new people, places, and experiences. At the end of each chapter, came confusion, hope, and a new direction. He might not have known it at the time, but all these chapters would come together to create the story of who he is now.

His adventure began in college, where he faced an uncertain future. Like many students today, he did not have it all figured out. His journey is one of inspiration to all college students who are struggling to find their way.

“I’ve told students before that I think one of the most important things they can prepare to do or envision themselves doing is sort of like those little wind-up toys,” Aper said, “You put them on the floor and they would take off, and if they bumped into something, they would spin around and go the other way. In a way, it seems to me that there’s value and wisdom in that professionally because when I bumped into some things, I turned around and went another way.”

As a first-generation college student, Dr. Aper was not sure how college worked or what he wanted to do. Aper attended Blackburn College, a liberal arts work college in Carlinville, Illinois. As he attended school, he worked hard labor jobs like pouring concrete, fixing roofs, and plumbing. He spent his time working and attending school, but he had no idea of what his future would hold after college.

“I was probably a senior and I thought, man, I am so clueless,” Aper said, “I had no sense of direction. People would talk to me about some sort of career plans, and I thought, I don’t have a career or a plan. I felt kind of lost.”

Right after college, Aper worked for an office supply company. The company’s current owner was close to retirement, and he offered Aper his entire business. The owner did not have any close relatives and he had grown close to Aper.

Dr. Aper married Sandy, the girl he dated throughout college and shortly after, decided he would get his master’s degree. Along with getting his degree, he worked for the National Parks Service at the Lincoln Home National Historic Site.

He worked to preserve and restore artifacts and buildings from Lincoln’s time period. He had finally found a job he loved, but with the election of Ronald Reagan in 1981, the National Parks Service took a major cut. Most of the money had dried up and Aper was out of the job.

Dr. Aper had a choice to make. That chapter of his life was coming to an end and he needed to figure out what was next.

The next chapter was teaching middle school. Aper moved to Milwaukee and taught seventh and eighth grade U.S. history, world geography, science, and math. On top of teaching, Aper also coached. He coached soccer in the fall, basketball in the winter, and baseball in the spring.

Even with summers off from teaching, Aper still had to work odd jobs over the summer. He was not paid for coaching and the pay from teaching alone was not enough. Dr. Aper worked in a hardware factory, a chemical factory, at Kmart, and other places.

After turning 30, Dr. Aper was worn out from teaching. He and his wife had a one-year-old son and he began rethinking his job. He thought, “Do I want to do this for the next 35 years?” He decided that he needed to turn to a new direction.

Back to the drawing board, Aper visited the local library, seeking inspiration. He stumbled upon a newspaper called “The Chronicle of Higher Education.” The paper focuses on news, information, and job postings for colleges and universities. Aper had never heard of the paper before, but he was intrigued. Something drew him to read more.

In the back of the paper there were ads about different job openings across the United States. Dr. Aper found himself looking at one for a fellowship program in higher education at Virginia Tech. The fellowship was for a doctoral study. After applying, he received an invitation to head east and interview for the fellowship.

Aper thought it was time for a new chapter, so his family packed up and moved to Blacksburg, Virginia. At Virginia Tech, Aper earned his doctorate and PhD in educational research and evaluation. Dr. Aper continued to work at the school after getting his degree.

Aper ended up being coordinator of assessment for the school. Modern assessments were a new thing in the 80’s, so he led the professors through this new concept. When one of his friends and colleagues decided to accept a position at another school, Dr. Aper realized it was time for a change in his life too.

“As I went along, I just thought, ‘There is the potential of doing something that is really helpful and valuable in helping facilitate the work of faculty and students.’ So, this whole idea of academic administration started to emerge in my thinking,” Aper said.

For the next 13 years, Dr. Aper took different positions at different universities. He was an assistant professor, faculty member, director of a graduate center, department chair, and the list goes on and on.

“Like Forrest Gump, I happened to be there,” said Aper. As new jobs opened up at universities, Dr. Aper was the right alongside moving up the ladder.

Then one day, Aper got a call from the president of his alma mater, Blackburn College. They were reorganizing their institution and had created the position of the Provost. The position that had once been the academic dean.

This was his dream job. After talking it over with his wife and son, who was now in high school, his dream job became a reality.

“Moving back to Blackburn felt like going home” said Sandy.

As a new position, it was up to Dr. Aper to define the role of the Provost. To him, a Provost had always been some intimidating person high up in a tower on campus somewhere. Dr. Aper wanted to work face-to-face with the students and faculty and find a way to relate to every person that stepped into his office. It was a big job to take on.

“When I started out in the Provost “biz” it took all of whatever powers I had, all of my creativity, all of my intelligence, all of my ability to absorb information just to try to get my mind around the complexity of the pieces of this thing that we were looking at and all the personalities involved,” said Dr. Aper.

After 12 years at Blackburn, Aper got a call from Millikin University. They were looking for a Provost and thought Dr. Aper’s experience made him a perfect match. He did not know much about the school, but he was interested. Aper felt he had done his duty at Blackburn in setting up the Provost position. It was time for what would be his next and final career chapter in his life.

“Blackburn’s student work program prepared Jeff beautifully for Millikin’s performance learning,” said Sandy, “and we felt he could bring a unique perspective as their Provost.”

Starting in 2014, Dr. Aper became the academic face of Millikin University. His warm smile brings together all of the students, faculty, and staff. He leads with his strong intelligence, vast experience, and his inspiring ability to make choices that benefit the students and the university.

“He is really a great person to work with,” Cindy Landacre, his assistant said, “He is constantly working towards a goal and he doesn’t let something drop.”

Landacre has worked at Millikin for 23 years and has been Aper’s assistant since about 2015.

Being a Provost, utilizes everything he has learned throughout the past chapters of his life. All of his jobs have prepared him for the job he has now.

“I really needed to do the chapter by chapter, sort of a piece at a time, so that different kinds of experiences came together,” Aper said.

As a senior in college, Dr. Aper had no idea what each chapter would hold, but he learned as he went. Each experience gave him the tools he needed to expand his career and do work that matters.

Looking back to that day walking with his wife, Dr. Aper said, “she called it 25 years ahead of time and I didn’t have the vision to imagine how I would ever navigate that path.”

There is a reason why you choose the adventure and don’t skip to the end of the book. The choices are what make the outcome.

As college students, we can look to Jeffrey Aper’s adventure and find peace in knowing that we are at the beginning of ours. Even those of us without a plan can still achieve what seems impossible.

Who knows, maybe you’ll be Provost of Millikin University, just like Dr. Aper.