About four blocks away from Millikin’s campus, Dean Raphaella Prange and her family keep an assortment of pets that make life worthwhile.

“I couldn’t imagine living without pets of any kind,” Prange said. “[My family and I] enjoy having them around and pampering them from time to time.”

The children help their parents take care of the animals, teaching them responsibility and how important it is to take care of living creatures.

“It’s important for my husband and me that our children have responsibilities to learn to take care of living things and do chores,” Prange said. “The animals help provide that atmosphere in our home.”

They have a chicken coop with eight hens, a rabbit named Grace, a Golden Retriever named Sammy, and a Maine Coon cat named Maisy. 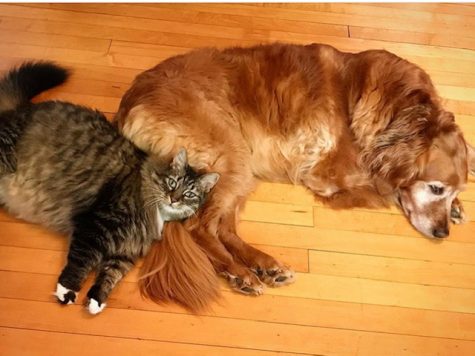 Maisy (on the left) and Sammy (right) cuddling togetherPhoto by: Dean Prange

One of Prange’s secretaries found Maisy in a corn field, and thus, the kitten was named after the Spanish word for “corn.”

Maisy is very affectionate toward the Prange clan, but she is also wary of strangers. Prange had described Maisy as “wild” and “beautiful.”

One habit Maisy is known for is hitting her head against the Pranges’ closet door to wake people up. She does this around five in the morning, and when she does, it sounds like a gun going off. Prange has had to lock Maisy into the dining room so that she wouldn’t run into the closet door.

Maisy also can’t get enough of carbs. When Prange makes homemade bread, Maisy will be there to eat some. She also enjoys pasta and anything that has grain in it.

Maisy enjoys being pet and cuddling with Sammy by the fireplace in the colder weather.

The Pranges adopted Sammy from a Golden Retriever rescue center when she was a year old. She had been left in a cage for the first year of her life, and because of that, her bottom teeth had been grounded down from chewing on the cage. Not only does it mean that Sammy can’t play tug-of-war, but it also means occasional visits to the vet to irrigate her gums if her breath’s stink gets too overwhelming.

Thankfully, for the past eight years, Sammy is living a fulfilling life. She loves eating anything she can get her paws on. She goes crazy for tennis balls and squeaky toys. Above all else, she is great at cuddling. 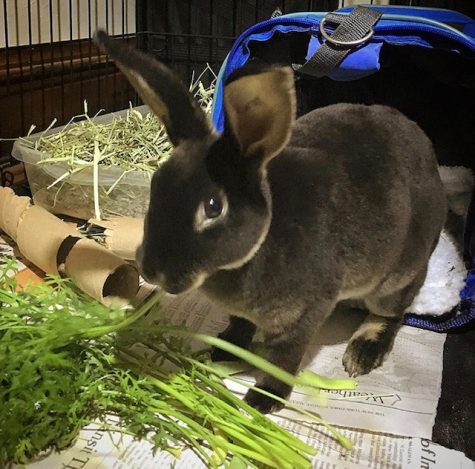 Grace the cuddly rabbit enjoying a snackPhoto by: Dean Prange

Outside the house in a big pen, there’s another animal who’s fluffy and great for cuddling: Grace the Black Cornish Rex rabbit.

Prange’s daughter really wanted a rabbit, so they got one. Grace’s best qualities are that she is cuddly and cute. She enjoys munching on carrot tops as well as other vegetable tops. Though she doesn’t like being picked up, she does enjoy getting pets. 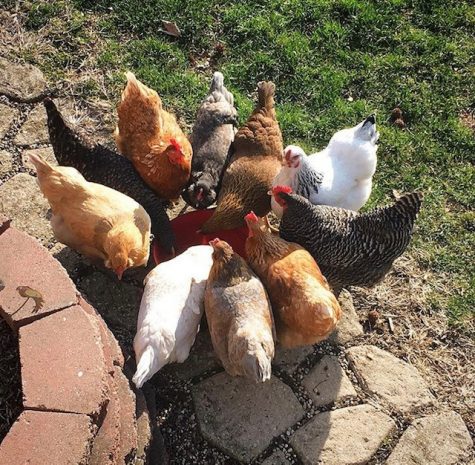 The Prange Chickens enjoying a mealPicture by: Dean Prange

Right next to Grace’s pen is a palace fit for a chicken roost. Prange’s children each named two chickens. Her daughter named hers Puffy and Chubs, and her son named his two Nightmare and Killer. The other chickens are named Moe, Larry, and Louie.

The Pranges keep a wood-burning fireplace. They keep the ashes from it and put it in the chicken palace. The chickens then roll around in those ashes like they would in a bird bath. They clean themselves this way to keep from getting parasites.

The chickens eat worms and whatever scraps the Pranges have from their meals. They also have free range in the yard, protected by a fence. Prange’s daughter loves to walk the chickens with a chicken leash.

Their eggs come in all colors, and they sell them along with their home-grown vegetables in the farmer’s market.

All the animals get along well together. Sammy, in particular, likes playing around with the chickens. Moe and Larry sometimes chase after the vegetables to eat them. Aside from that, everyone gets along just fine in the Prange ecosystem.

“It’s funny to watch them all interact because they’re all very calm with one another,” Prange said. “And it’s a great experience for our kids learning where our food comes from, and they like them as pets as well.”