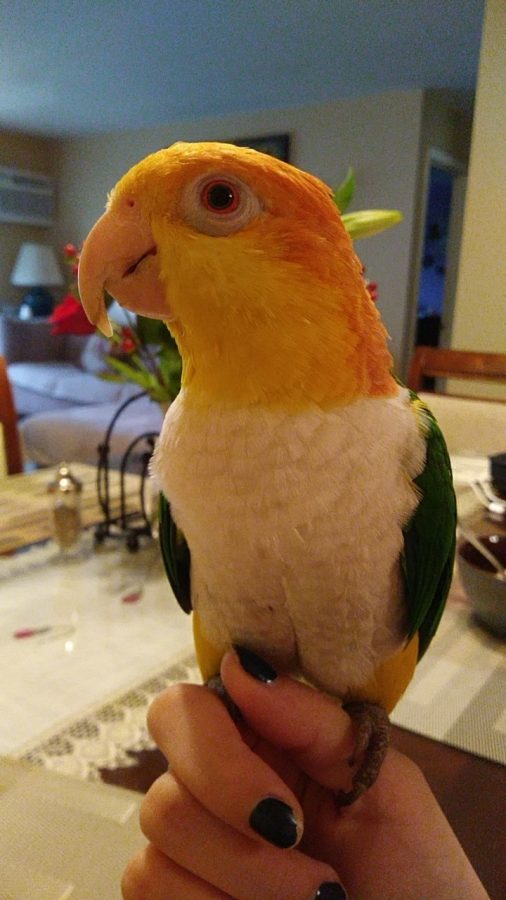 Freshman Stephanie Munoz’s cousin rescues birds. He found a small caique parrot and named him Rickey. He trained him for a couple of years, but he discovered he wasn’t going to have the time to take care of Rickey properly. He reached out to Munoz and her family, who accepted him as their own.

“My family has always wanted a bird,” Munoz said. “My mom always said when she was younger that she’s always wanted one in the future, especially when she has children.”

Caique parrots are known as the “clown parrots,” for they can learn tricks very easily. As such, Rickey has learned many tricks such as wolf-whistling and whistling classic songs such as “Jingle Bells” over and over again.

Sometimes on Munoz’s porch on the third floor, Rickey would wolf whistle if he catches anyone crossing the street. As the people wonder who it was, he would laugh.

Rickey can also give people fist bumps. He usually does this to get a scratch behind his back or if he wants some pets.

Some tricks he wasn’t even taught. Rickey can also headbang to heavy metal songs. Munoz doesn’t remember her teaching him how to do that, but she’s grateful that he’s a metal head like she is.

Ignoring his tricks, Rickey is also very quirky. When he isn’t perched, you could see him walk like a cat or dog. Plus, sometimes when he wants attention, he’ll move around in circles on the floor with his head facing sideways.

Rickey has also memorized the times family members come home. He’ll listen to Munoz’s father’s footsteps or even how he opens the front door. Then he’ll start scrambling and squawking toward the door to greet him.

On Sundays, when the family is getting ready to go out somewhere, Rickey often wants to come along, too. He’ll take a morning shower, get in his portable carrier, and whistle to let everyone know he’s ready. When they tell him that he’s not coming along, he would cry.

“He just wants to be a part of the family,” Munoz said.

Being a bird, Rickey isn’t allowed to have certain foods. For instance, he can’t have avocados or dairy products. He also can’t have any carbonated drinks like soda because of the gasses they have.

Rickey can have fruit, though. His favorites include grapes. He’s very particular to how he wants them, though. They must be cut in half, and they can be green and or purple.

Rickey also enjoys loud energy. Since he’s a parrot, he’s more inclined to enjoy loudness. He especially enjoys feeding off the joyful energy of little kids. Not once has he bitten a child, and he enjoys their company most of all. The Munoz clan does keep a close eye on him, though.

“You can’t just leave [birds] there to let them do their own thing,” Munoz said. “You need to be constantly interacting with them. Otherwise, they’ll think you don’t want them, and that’s how bad things happen to them.”

When people adopt or buy birds from shelters, they sometimes don’t do proper research about the birds they have. They would often give them the wrong diet or have a cage that’s too small for them. Even worse, sometimes they would tap the cages or shout at the birds when they get too loud.

And how birds would respond to mistreatment? Some birds lash out by biting. Others resort to plucking their own feathers out to deal with their anxiety. If they’re mistreated, they’ll never forget it anytime soon.

Fortunately, Rickey is having the best care possible. He’s happy, healthy, kind, and loud, and Munoz couldn’t be happier to have him in her life.