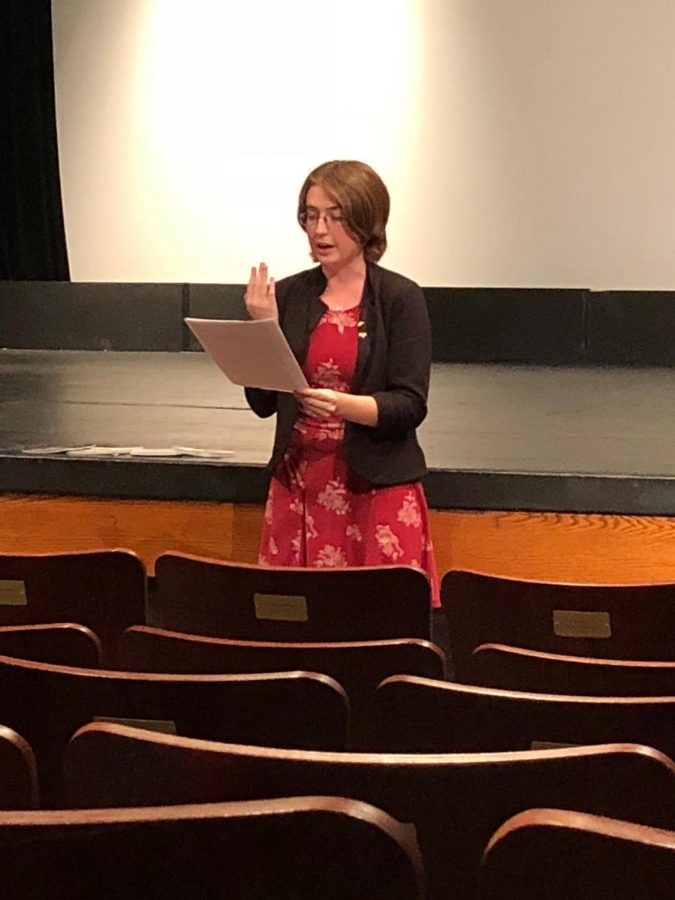 Kathryn Coffey read her work from the Fall 2019 issue of "Collage." Photo by Sydney Sinks

“It’s just really great for Millikin as an institution to host this for so many years and bring in so many writers and support the students in seeing working writers doing what they love,” Teague von Bohlen, the featured fiction writer, said. “I’m really impressed by the participation that you guys have.”

Bohlen and Emily Skaja, the featured poet, traveled to campus for the festival. They hosted workshops and craft lectures, and they read from their respective books.

Bohlen is a professor at the University of Colorado Denver. He collaborated with his cousin, photographer Britten Leigh Traughber, to create “Flatland,” a book of regionalist flash fiction.

“It’s very sweet to come back, but it’s also sort of bittersweet because it’s hard to come back anywhere where you were very young and dumb, making lots of dumb mistakes,” Skaja said. “That’s always kind of humiliating, but it’s been so long now, I feel like it’s just a very nice homecoming.”

On Friday, Nov. 8, Lit Fest kicked off with a dinner and two readings in Albert Taylor Theatre. Bohlen read from “Flatland.” Current Millikin students read their work from the upcoming issue of “Collage,” Millikin’s literary and fine arts magazine.

“As a professor and as a writer, I believe in getting out there and talking to students as much as I can,” Bohlen said. “It’s great to read to an audience that not only gets what you’re doing but is sort of actively participating in developing that skill on their own.”

Saturday, Nov. 9 began with simultaneous fiction and poetry workshops taught by Bohlen and Skaja respectively. Students could choose which workshop to attend.

“I really enjoyed the poetry workshop,” Kionah Flowers, a creative writing major, said. “We did a lot of techniques that I’ve never heard of before.”

After a short break, Skaja presented a craft lecture on the elegy. She included several elegies in her poetry book “BRUTE.”

Two readings closed out the festival. Millikin faculty and alumni read their work, followed by Skaja’s reading from “BRUTE.”

“I think most educators are all too familiar with a classroom that might be half full of people who don’t want to be there,” Bohlen said. “So coming to an audience that really wants to be here, and they’re here on a Saturday, that’s a big deal. You have to honor that. You have to respect that.”

In addition to Millikin students and faculty, there were several high school students in attendance. Millikin sponsors a high school literary contest that coincides with Lit Fest. This year, they received international submissions for the first time.

Dr. Stephen Frech helped to organize the event. He has close friendships with both Bohlen and Skaja. Bohlen has spoken in Frech’s classes before, and Skaja was one of Frech’s students when she attended Millikin as an undergrad.

“It’s really wonderful because [Millikin] was the first place I ever was where I felt like I decided that I was going to be a writer in a serious way, and also, it was the first place where anyone took me seriously as a writer because Dr. Frech was so amazing,” Skaja said. “Dr. Frech always mentored me and gave me poems that he thought I’d be interested in…I feel like I want to be that kind of professor to my students.”

Millikin plans to host its 18th Literary Festival next year.