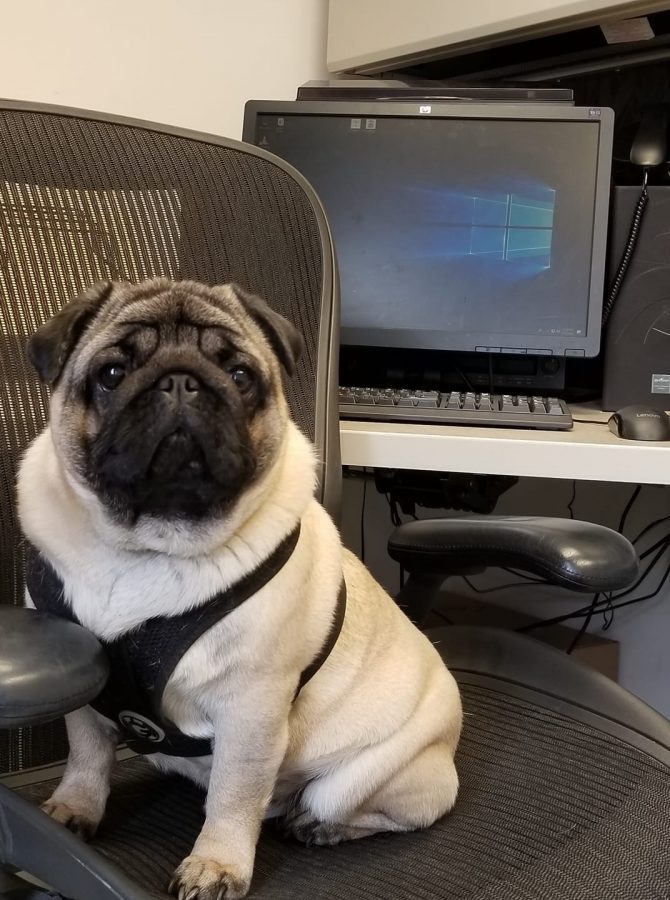 Around 18 months after she got married, Millikin musicology professor Katherine Leo approached her husband and told him she wanted a dog. Although he was initially hesitant toward the idea, Leo’s husband agreed, and they went to Penwood Kennel to find the perfect pet.

They came across a litter of four seven-week-old pug puppies: two girls and two boys. One girl puppy was very excitable, but her brother was a little more laid-back than the rest. After a few moments of courage, that chill puppy was on Leo’s lap. They decided to keep him and name him Charles Martel, or Marty for short.

Since living with the Leos, Marty had let his personality shine. He’s a sweetheart with an expressive face. He’s a pug in just about every sense of the word. Pugs don’t bark a lot, but they will make little noises like snorts and grumbles. He’s also an easy pup to talk to. If you say something to him, he’ll turn his head and make a funny expression or sneeze.

“He’s so responsive, which is strange, but also really wonderful,” Leo said.

Marty is also very intelligent. He can learn basic dog commands like “sit” and “stay,” but he can also ignore them just as quickly.

Being an intelligent pup, Marty feels that he’s entitled to all the finest things in life, and that includes having a place at the dinner table. It all started while visiting family in Seattle, Washington. Leo thought it would be a cute idea to have Marty eat meals with them at the table. Now, he feels obligated to have his own seat when sharing meals.

On top of that, Marty can feed off a room’s energy as well as the occasional people food. One time, he was sitting at the table with Leo’s niece and three nephews. He started mimicking the children’s whining, and it was starting to drive Leo crazy. Then, one of the children handed him a McDonald’s French fry. While it was cute, now Marty goes ham on French fries.

“Marty does pick up the energy in the room, and it’s almost like having a three year-old,” Leo said. “He’s the cutest thing, but he can be so stubborn sometimes.”

Marty also loves going to the vet. He especially loves eating Pill Pals, tasty treats that you can put medication in so it makes taking meds a little more fun for dogs. Unfortunately, they also contribute to weight problems, which pugs are notoriously known to have.

Moreover, Marty loves getting all the attention from the vet’s administration staff. He’ll patiently wait his turn before turning his head toward them and crying to be held. Leo will bring him over to the staff, and Marty will reach toward them with his paws wide open, asking for hugs.

As long as he’s not lying on the floor, Marty would be a happy camper anywhere. He loves being carried, bundled in blankets, and resting on pillows.

Even Leo’s husband had grown to love him. They tend to learn a lot from each other, and for Katherine Leo, it’s wonderful to see.

Each semester on the first day of her classes, Leo shows off pictures of Marty. Her phone is full of them, and she loves showing them off. Whether he’s pretending to read a book or music scores, bundled in a blanket burrito, or snuggling up to watch TV, there’s a chance that he’ll look cute when he does it.

“He’s brought so much joy to my life and my husband’s life,” Leo said. “Marty’s just a wonderful sweetie!”