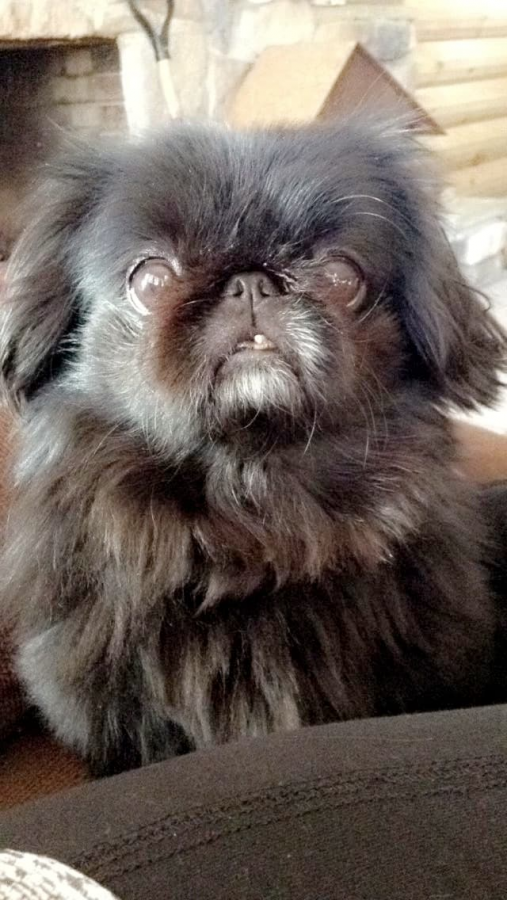 October 24, 2019, at the PMC: SAI (Sigma Alpha Iota) and PMA (Phi Mu Alpha), Millikin’s music sorority and fraternity respectively, are having a planking contest. Each contestant would try to hold their planking position for exactly four minutes and whoever holds them the longest without faltering would receive money for their organizations.

Representing SAI, there was a junior instrumental music major with a special ed endorsement named Victoria Myers. And among the small audience is her constant companion, a black Pekingese dog named Hank.

Hank has been a part of the Myers’ clan for eight years. His original owner had abandoned him as a puppy because he accidentally peed in her house. Myers and her family decided to take Hank in as a foster family until he could find a forever home.

“So, we took him in, haven’t found him a new home, and we just accepted him as one of our own,” Myers said.

Hank is a dog with a cat’s personality. He is very independent and has no interest in exercising or playing with other dogs.

Hank is also really clumsy and is in denial about it. He thinks he can leap off a couch or a bed with a cat’s graceful stride. However, more often than not, he’ll always land flat on his face. But that won’t stop him from doing it anyway.

As Pekingese dogs get older, they start to lose their teeth. As such, Myers feeds Hank some soft food to make it easy on what’s left of his teeth. Hank loves the simple treats. He’ll go crazy over cooked chicken or hot dogs. In fact, those treats are ones he can have while enjoying them at the same time.

Hank also loves sleeping. He even snores in his sleep. More importantly, he can always count on cuddling with his tiny, squeaky giraffe toy. He won’t play with it, just cuddle.

Because he’s a cuddle buddy, Hank can make every night one to remember. When he cuddles with Myers, he moves as close to her as possible, just to keep his owner warm, safe, and loved.

“He’s a really good cuddle buddy if you want to watch movies [together],” Myers said.

Hank is also big on having attention, especially at the groomers. He loves getting his nails done and getting pampered.

Hank can’t stand being alone. If he’s even put into a cage, he’ll bark until someone would come and let him out.

Although he is an attention-lover, some people may not see that in Hank, at least not at first. When he meets new people, he would sometimes go into guard-dog mode and would bark at them. However, when he spends a few minutes in their company, he’ll calm down and warm up.

“Even though he may be intimidating, he’s a cute little love bug,” Myers said. “He’ll be your best friend if he’s around you long enough.”

Meanwhile at the PMC’s planking competition, the contestants are at their tipping points. It could be anyone’s game. And Hank is sitting around, soaking up all the attention he can while patiently waiting for Myers to finish her planking.

Finally, Bradley Perry gives way, making Myers the winner of five dollars. While Myers stretches on the floor to recover, her friend, who had been keeping an eye on Hank for the whole competition, hands over Hank’s leash to her. She can thank her lucky stars that she can have her best cuddle buddy by her side to celebrate the highs life has to offer. Once she collects herself together, she and Hank go on an evening stroll to celebrate victory together.