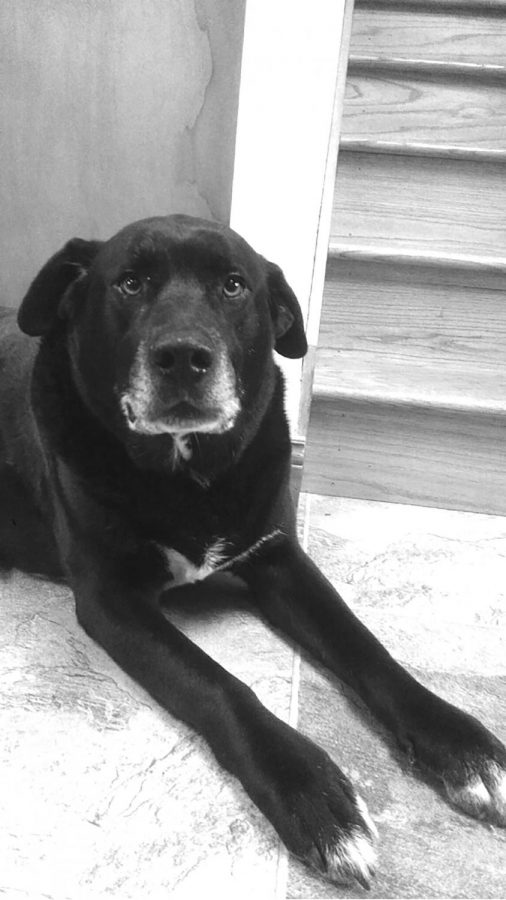 Junior Music Education and Piano performance major Leah Wier considers herself grateful that she grew up on a farm, which her family has owned since the 1700s. She’s especially lucky to have a loveable goofball like Rigsby in her life.

Rigsby is a mutt/Black Lab mix that has been living in the Wier household since Wier was in high school. About six or seven years ago, they found him as a puppy. The family was getting back from a Bible study when they noticed a puppy, found abandoned on the side of the road. They pulled up, and the dog leaped inside. Since no one came to claim him, they got to keep him.

Rigsby is named after the character in “The Mentalist.” It was Wier’s father’s favorite show and the family would often watch it together. “The Mentalist’s” Rigby is a character that can only be described as clueless and ditzy. In time, those two words came to describe the dog’s personality perfectly.

One of Rigsby’s finest quirks is that he doesn’t bark as much as he howls. Wier’s parents tried to teach Rigsby to bark. Subsequently, they started howling, which the dog took to do. Now they would have to talk to get Rigsby to howl. “I guess he’s trained us to make a fool of ourselves,” Wier said. “Then he rewards us by howling.”

Rigsby is a mutt who loves the simple and weird things. His bread and butter are Milkbones and gloves.

Gloves can make Rigsby go crazy. If you wear gloves and he happens to be in the room, he’ll immediately try to go for the gloves. He won’t bite hard; he’ll only bite in a playful way. If you take off the gloves and toss it to him, he’ll be taken to town.

That being mentioned, Rigsby loves people. He’ll always be up for a cuddle wherever and whenever it’s desired.

In fact, at any opportunity he gets to have attention, Rigsby will just pounce on it. He’ll lean up against you and get all the attention he wants and more. He even has a sweet spot on his side where if you pat it at just the right way, his hind leg would kick.

One of Rigsby’s habits is that he’ll sleep on Wier’s bed. One night, there was a storm raging outside. Wier loves to wake up to the sound of them because the thunder sounds awesome. Rigsby, on the other hand, wasn’t as pleased. The thunder woke him up with a start anleapedleapt up onto Wier’s bed and snuggled right next to her.

Since Wier lives on a farm, there are two things both Rigsby and the family are well aware of.

One thing is Rigsby is co-living with other animals. Before Rigsby, there was another dog, who got along with Rigsby fine. But since that dog died, Rigsby is now the only dog living on the farm. A lot of cats come by the farm. As for how well they get along, all Wier can say is, “I wouldn’t say they’re friends, but they co-exist.”

Another thing is when you live on a farm, you can get used to the circle of life. They raise cattle so they could eventually be used for food. They also have outdoor cats and they tend to die a little quicker than house cats. In short, they get used to the fact that dying is a part of the process.

Now, that’s not to say they don’t recognize a pet can be part of the family. They’ll still continue to love and care for Rigsby as much as any other responsible pet owner should. “We love our dog and we’ll be sad when he dies,” Wier said. “But at the same time, we recognize it’s what happens.”

In the meantime, Rigsby can relax and live in the comfort of a nice loving home. He’s never been trained to herd any livestock, so he won’t be working the farm anytime soon. Nevertheless, he has a home with a family that cares for him dearly and he wouldn’t want it any other way.