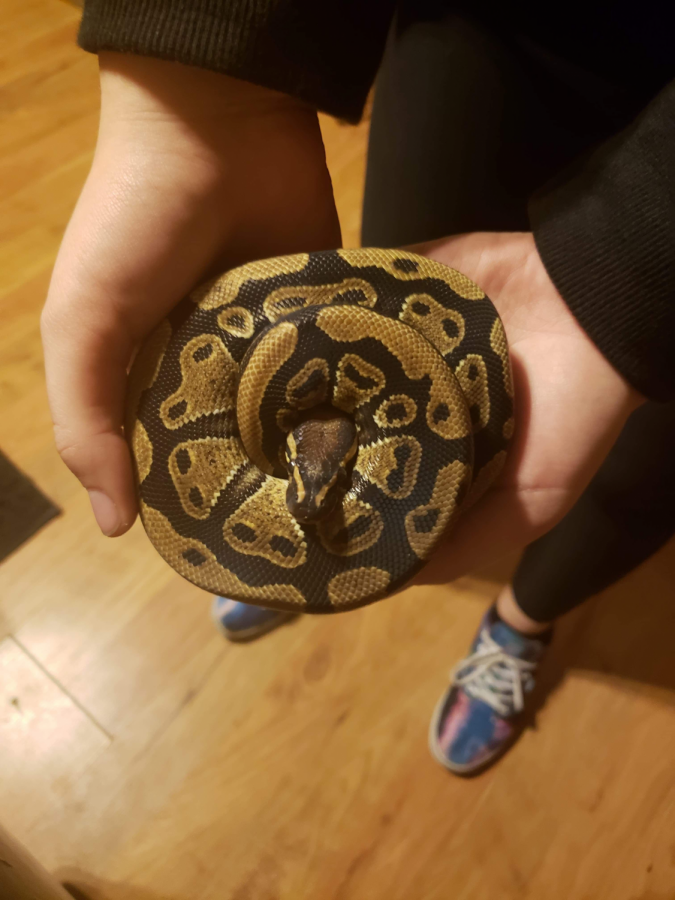 Junior Theatre and English Writing major Tressa Rudolph considers herself very lucky that she lives in an apartment with her roommate’s ball python Dante who lives in a small cage heated with a lamp, a wooden branch, half a log, fake greenery, a pool of water, and a skull head buried in wood chips. He belongs to Rudolph’s roommate Carrie Thompson.

Thompson always wanted a snake, and when she brought the idea up with her roommates, only one had reservations about it. Eventually, Dante slithered his way into all their hearts, and now everyone in the apartment loves him.

His original name was going to be Alucard, which is Dracula spelled backward, but it took quite a bit of convincing from Rudolph and the other roommates to deem it an unwise decision. After a few moments debate, they decided to call him Dante, after the famous poet who wrote the Divine Comedy.

One of Dante’s favorite things to do is to dig holes in the wood chips. He tunnels under everything for no apparent reason. The pool he has is supposed to be against a corner of the cage, but he had moved it away from the wall and curl up into a ball against the wall.

Another quirk about Dante is that he doesn’t touch the skull in his enclosure. When he was smaller, he would crawl around the eyeholes. Now he pushes objects through the eye holes but won’t get in them himself. In fact, he wouldn’t go anywhere near it. “We gave [Dante] a cool thing to mess around with, and he just lays in the bush and digs through wood chips,” said Rudolph.

Dante also loves resting up against the fake green vines that are next to his log. He climbs it and just lays there, which Rudolph finds weirdly amusing. “It’s fallen down a couple of times, and I’m like, ‘you’re so clumsy,’” Rudolph said.

Clumsy is just one sweet nickname Rudolph would call Dante because of his way of exploring the world around him. Usually, she and her roommates wouldn’t allow him to explore, because when he’s out, he would test how far he could go before he’s stopped from his adventure.

When feeding time rolls around, Dante has to be moved to another place called the feeding tub. If he gets fed in his own cage, he would most likely get territorial and wouldn’t want anyone around. After de-thawing the frozen mouse, they would throw it in the feeding tub and let Dante do the rest.

Only sometimes Dante wouldn’t eat the mouse right away. Frozen mice smell nothing like real mice, and thus, he wouldn’t recognize the frozen mouse as something edible. To fix this problem, they poke a hole where the brain would be, a process called de-braining, so Dante could smell it and eat it.

When Rudolph and her roommates take him out of the cage for people to see and hold, Dante’s first instinct would be to try and find the warmest spot on your body. It might be shirt sleeves and pockets, but it would more than likely be your hair. “He just climbs up into your hair and decides, ‘yep, that’s where I want to nap for the rest of the day,’ and just sits there,” Rudolph said.

A misconception that people have when it comes to holding snakes is that you would get salmonella. Rudolph has had Dante slither on her face, yet nothing bad has ever happened as of yet. As a precaution, she and her roommates have their guests wash their hands after handling Dante.

After experiencing having a snake around, Rudolph plans to get one for herself someday. Although he can get nervous around new faces, all Dante needs is to make sure to feel as at ease as possible before being handled. “I think it’s important for people to know that just because I have a snake it doesn’t mean it will eat you,” Rudolph said. “He’s not even venomous and is anxious about most things, so it’s not weird that he’s our pet, and we love him very much.”