Millikin Student Forges His Own Future 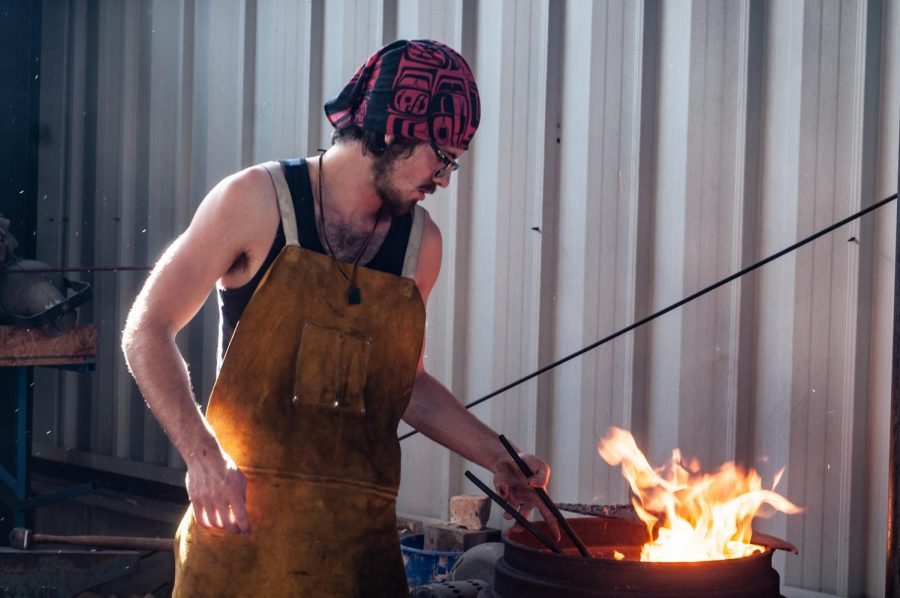 Some people stand out. They accomplish incredible things and approach the world in ways out-of-place or even a bit scary.

“There are only two sure things that’ll happen in a bladesmith shop: burning and cutting,” Alexander Bergland, a sophomore pursuing an interdepartmental degree, said as he stoked a raging fire. “There are plenty of both.”

Bergland makes knives from scratch. It’s a practice that might seem peculiar to many, but Bergland is a guy who doesn’t let other peoples’ opinions determine what he learns and the passions he follows.

“I think more than anything, Alex inspires me to take hold of things that I find valuable and to continue to chase after those things more than just things that I just find practical,” Zach McReynolds, a sophomore Entrepreneurship major and Bergland’s close friend said.

Bergland dedicated a large piece of his semester to operating a primitive forge in the 3D Arts building on the Northeast side of campus. He spent hours on Tuesday and Thursday afternoons turning discarded pieces of metal—primarily old wrenches and rebar—into blades.

He fires the steel until the point it’s red-hot, hammers it, “quenches” the steel with oil, making it hard and shiny, and then finishes the edge. After working with the blade, he carves and fastens handles made out of exotic wood and gives them sheaths.

It’s a long process and each step might take hours or even days. The forge itself is little more than a firepit with an electric fan – to help the flame burn hotter – attached to the side. The rest of the process requires difficult labor.

In the end, the blades end up being incredibly high-quality and unique. His own personal blade, for instance, is durable, versatile and sharper than a razor.

This past semester, he created a small collection of blades averaging about six inches long. In addition, he sketched a design for a broken-back seax, a middle-length blade he plans to form out of an old metal wood file.

“The broken-back seax has a beautiful shape, good multipurpose in both fighting and trapping,” Bergland said, “And it’s badass.”

The forge itself isn’t big enough for him to create such a big blade, yet, but it’s a pipe dream – perhaps to finish after he returns from studying abroad in the Netherlands – and a nod to his mentor, who taught him about bladesmithing in the first place.

“He was in Iceland for several years and toured Europe with a Viking troupe that did live-action reenactments with real steel,” Bergland said. “He was really into Viking culture and customs.”

Bergland trained as an apprentice with him in Alaska over the summer, learning the skills he needed to pursue bladesmithing. After all, no Millikin course teaches bladesmithing. Bergland truly is blazing a trail with a hot blade.

Not many people can say that they can create knives from scratch and several might wonder why. Those who do might agree that it’s an excellent story to tell. For those who know Alex Bergland, they agree his life is full of these stories because he makes sure he lives them. In that way, people often equate him to a storybook character. 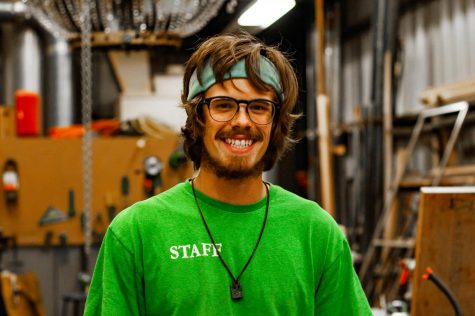 “Alex is just crazy–if you took Alexander Supertramp from ‘Into the Wild’ and personified him into someone who’s a little bit more tied down to reality than the character in the book is, that would be Alex,” McReynolds said. “Not only are their namesakes similar but they embody the same free-spirited characteristics. They both do things that they want to do because they want to do it. That’s exactly what Alex does.”