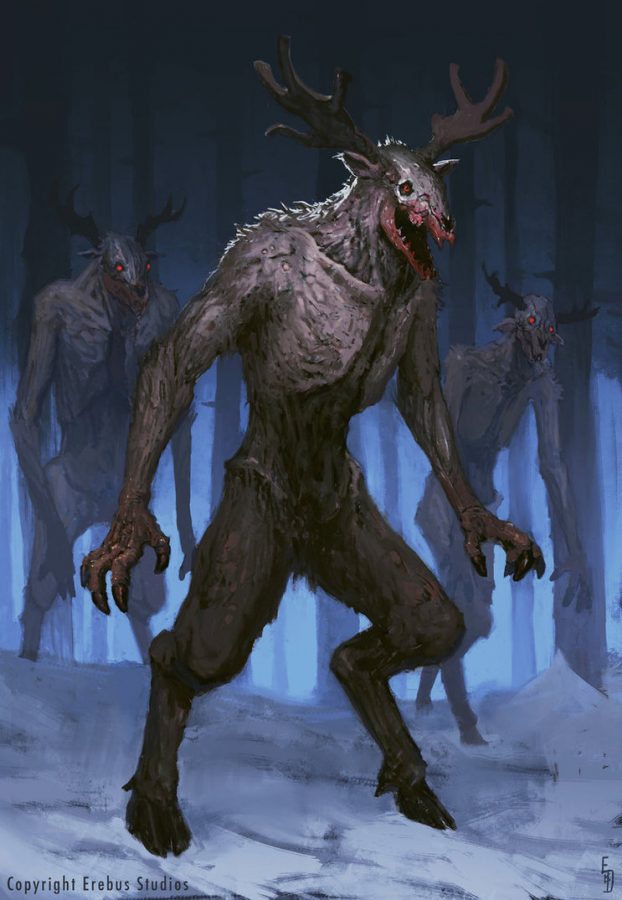 Since Millikin was built on top of an Indian burial ground. It makes sense for the monster spotlight to be one about a creature of Indian Lore: The Windigo or Wendigo.

The Windigo is a creature created when a spirit of cannibalism possesses a person. The stories would involve one person or a group of individuals being trapped without food. Rather than starving to death they chose a worse fate and resorted to eating an already dead body or in some gruesome cases killing someone else so they could devour them, and push back starvation.

Some people say starving to death is one of the longest and most painful ways to die, usually making people desperate for food. But once they take a bite of human flesh they are possessed by the spirit of a Windigo. The mix of the spirit and the human flesh make them stronger and twist the body into a new form. Their limbs become elongated, and they grow sharp teeth and piercing claws.

Finally, all sense the person had before is gone, and they have a mind that reverts not only to a primal state, but also a greedy and gluttonous one. For a Windigo, will start hunting for the new food it craves: human flesh. But it won’t stop eating after one person. It will eat forever, never being full. It is believed that with each person they eat they grow bigger making its stomach able to eat as much as it wants. They can hibernate for years at a time and are most commonly found in more northern regions where it is often cold.

If you have the unfortunate pleasure of coming face to face with a Windigo, there is little chance you’ll survive. Even just being in the same forest as one is enough to spell out your doom. Windigos are incredibly fast, traveling speeds that are inhuman. They can climb and jump extremely high, but most importantly these creatures aren’t stupid. They’re incredibly smart and are known as being hunters. Not only do they have enhanced senses allowing them to hear a twig crack a mile away and see things in pitch black, but they can perfectly imitate someone’s voice or cry for help. These traits make windigos extremely lethal during the day, but especially at night.

Now if you are crazy enough to try and hunt these abominations or even just want to know how to escape these things there are some things you’ll want to know. The most important thing about them is their skin. Their skin is bulletproof and knife-proof. It’s extremely durable, and conventional weapons will not do. Their one weakness is that which men have harbored for years; fire. Windigos susceptible to fire and can be killed by setting them aflame. An explosion will also do the trick.

Another note is that some windigos will hunt in packs, but that depends if the windigos were together when they were humans.

The windigos were created in Indian folklore to emphasize the evil of cannibalism, not only demonizing those that took part in it but also giving reason to hate tribes that did.

Now windigos have appeared in culture most notably through the show Supernatural and the video game Until Dawn.

One final note on windigos. If you find yourself in a situation where you are stuck without food and either must starve to death or resort to cannibalism your best choice is to starve to death. Because when you become a Windigo, you have no control and full consciousness. You’ll be forced to kill and eat despite what you want. And if you do resort to cannibalism you will change in four days. The only way not to is to find a way to kill yourself. And trust me that’s the best option.