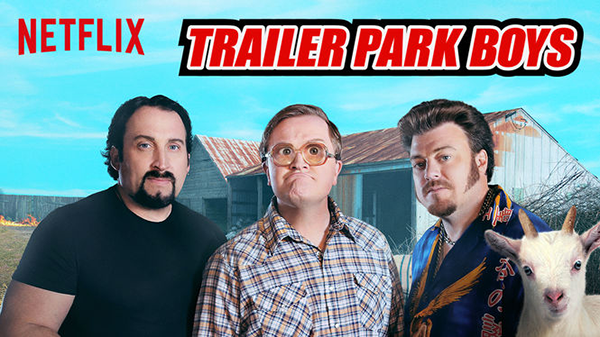 Trailer Park Boys is a Canadian comedy tv show that originally aired from 2001-2007 for seven seasons. After being cancelled, the show spent a few years on hiatus until 2014 when Netflix picked it up and produced seasons eight, nine, and ten with an eleventh season set to be released sometime in the near future. Besides continuing the series, Netflix also produced three live stand up specials featuring several members of the cast portraying the characters they portray on the show and producing their own plots exclusively for the special. The series also has three movies and two special episodes that are also available on Netflix.

The show follows a similar setup to The Office in that it is made to seem like a documentary and characters frequently break the fourth wall. The show follows Ricky, Julian, and Bubbles, three former criminals living in a trailer park in Nova Scotia. Over the course of the series, the three come up with different schemes to make money which usually involves illegal activity. Every season deals with a different idea or scheme to make money with an overarching plot to each season. The show also features many side characters such as Cory and Trevor, two teenagers who do the worst parts of the schemes, J-Roc and Tyrone, two wannabe rappers who get involved in crimes as ways to further their rap careers, and Jim Lahey, the alcoholic trailer park supervisor who serves as the series’ antagonist. The show has also had several famous guest stars such as Skid Row frontman Sebastian Bach, Snoop Dogg, Rush guitarist Alex Lifeson, Helix frontman Brian Vollmer, and actors Tom Arnold and Doug Benson. The show’s second season also featured actress Ellen Page in a recurring role before her career took off.

As far as quality, the show starts off kind of slow during its first two seasons, but after getting invested in the characters, the show picks up in quality and humor. The first two seasons feel bland with more simple plots. Because of this the episodes are not as connected as other seasons are. Around season three, they took on a new style of having overarching plot lines and connecting the episodes together which is something they continue for the rest of the series. Due to each season having an overarching storyline, it is not recommended to skip around in the series as you have to watch it in order to understand the bigger plotline. It is also worth noting that there is a different style between episodes made prior to the Netflix continuation and episodes made after the continuation. This is in part to when Netflix picked it up, several new writers joined and with new writers, there are new plots to the show.

Besides having a television series, the show’s creators also made three films featuring the same cast members and the same setting. The films are equally as enjoyable as the show are and since two of them were made during the show’s original hiatus, they work as connecting points between the end of season seven and the beginning of season eight. While there are some inconsistencies between the films and the show, there are some events in the films that are referenced in later episodes. The series also has two special forty minute to an hour long episodes with one being “Say Goodnight to the Bad Guys” which served as the ending to the series during its original run on TV. The other is a Christmas special which serves as a prequel to the series and explains the origins of several recurring jokes that are present in the show.

So what is the verdict on Trailer Park Boys? Due to its amount of seasons as well as specials and movies, it is more than just a series that you can binge in an afternoon but if you are looking for a longer term commitment I would recommend Trailer Park Boys and the films and stand up specials that also come from the show.