Delivering the MU Mission: student and professor team up to study the impact of 9/11 in the classroom 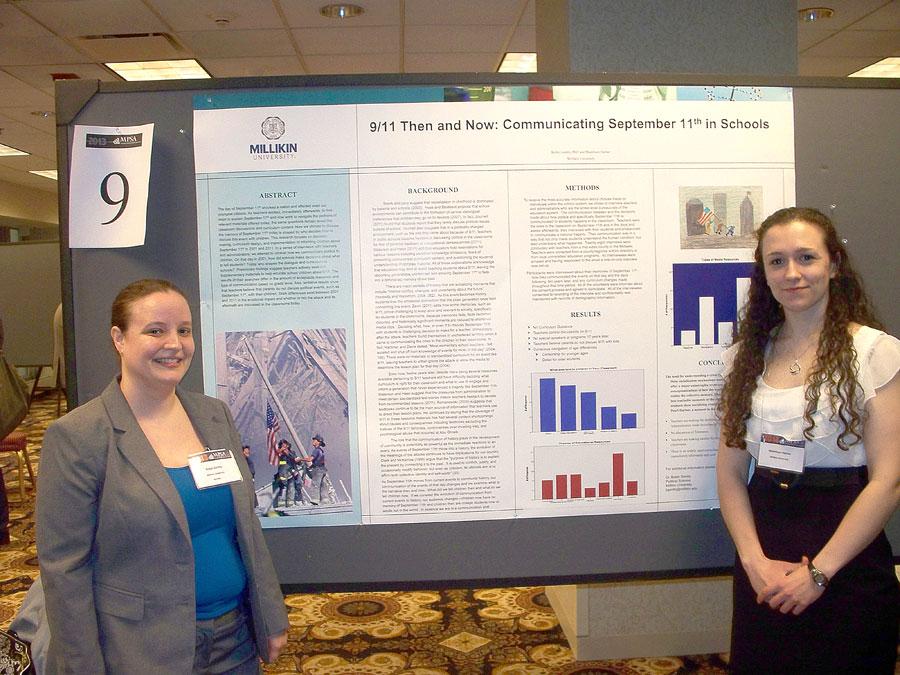 Nearly the entire Millikin student body experienced the traumatic events that occurred on Sept. 11, 2001. Everyone has a different story, and even today there are already children who ask, “Where were you during 9/11?” in much the same way their parents asked about Pearl Harbor.

Gentry is co-author of a year-and-a-half long research project entitled, “9/11: Then and Now.” She has collaborated with Maddi Harner, a junior double-majoring in political science and psychology with a focus in pre-law. Their study, the result of the Summer Undergraduate Research Fellowship, seeks to understand how teachers communicated the event to their students.

“I started thinking about it in my political participation and democratic citizenship class,” Gentry said about how the idea for the project occurred to her. She approached Harner with the opportunity, who took it up immediately: “It did start out as a really good opportunity for research—the ability to do research is going to look good on law school applications—and as I got into it, I got interested in the subject. I almost have an investment in it now, because I have a personal connection to it,” said Harner.

The project mainly includes interviews conducted by both Harner and Gentry. They also have sifted through textbooks and teaching curriculums to analyze what was and is being said about 9/11 in the classroom. The result is a poster that was presented at the Midwestern Political Science Association Conference, the second largest political science conference in the U.S., in Chicago during the weekend of April 12 among thousands of other posters, papers and discussions. Harner also hopes to get the information published in an academic journal someday.

The results of the project show that, due to the suddenness of the incident, many teachers simply shared information concerning 9/11 as it became available. “We found that a lot of them had no reaction in the form of teaching, because that hadn’t happened before,” Harner said. They used television, classroom discussions and even personal stories as resources to inform their students. Teachers of younger children simply did not communicate at all, Gentry stated, leaving it up to parents and school administrators to make the decision.

As mentioned, Harner plans on publishing the findings; past that, research is not a necessary goal for future endeavors, although knowing how to do such a huge research project can be instrumental in helping one stand out in almost any career field. For Harner, however, the knowledge she gained was the most impactful part of her experience, and she has some simple advice for those who wish to follow in her footsteps: “You need to make sure that you have somebody with experience…I am really thankful to Gentry.” A professional buffer for ideas can improve an undergraduate project, and, as Harner mentions, Millikin is a good place to start looking for said professional help: “There are staff here that will do [research] with you.” Gentry and Harner are just one of the many examples of Millikin’s faculty-student professionalism, even outside of the Celebrations of Scholarship presentations.