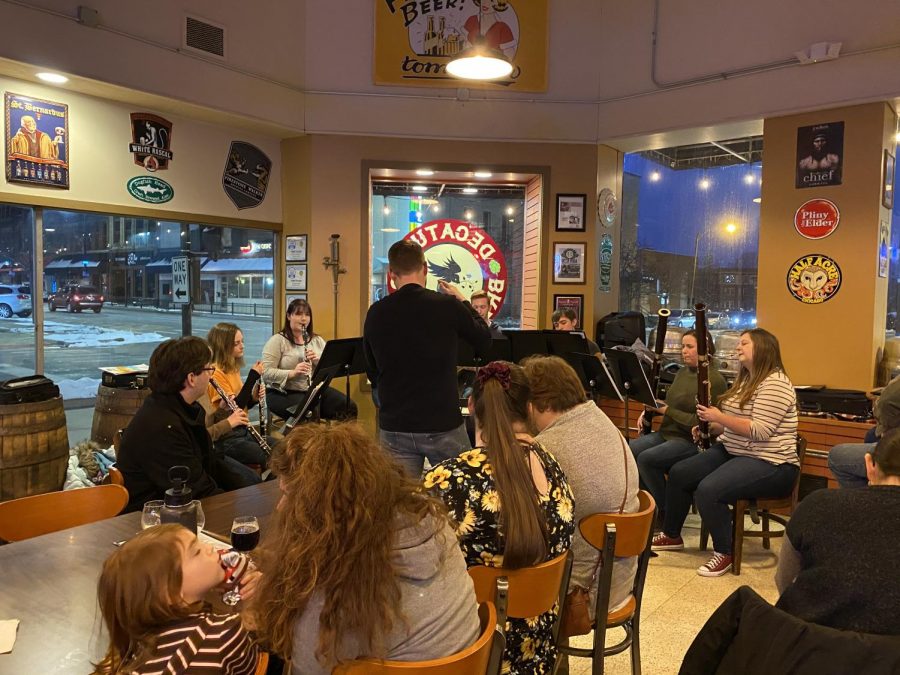 At the start of the year, MSWE director Dr. Corey Seapy had a few goals in mind, designed for whipping the Millikin Symphonic Wind Ensemble (MSWE) into shape. All this hard work will come to a head in a few weeks.

The MSWE celebrated Beethoven’s 250th birthday this week by performing his songs in local bars across Decatur. Eight members of the total ensemble had the privilege performing classic pieces for a charmed crowd.

The ensemble has also been prepping for their upcoming concert, and it will be unlike anything this ensemble has ever done before.

Their uniqueness goes as far back as their current repertoire. This concert will feature work written by all-living composers. Their age range is between their 20s and 30s, and most of their work have been written in the last year, or as far back as a few years ago.

In doing so, Dr. Seapy hopes to convey that wind ensemble pieces are being made all the time, mostly by people who aren’t as recognized as Beethoven or Mozart. It’s an aspect that he feels goes missing in the Wind Ensemble field.

“So often in large ensemble art music, we perform music by what we call ‘dead white guys,’” Dr. Seapy said. “And this concert is anything but that.”

Next song is a rendition of the classic folk song “Shenandoah.” You’d think with a piece that’s so simple and iconic that it would be the easiest piece they’re working on. You’d be wrong.

Here, the MSWE will fine-tune their intonation, balance, blend, and tone to make this rendition reverberate heart strings across the auditorium.

Recently the ensemble has received the last movement of their concert’s cornerstone: a brand-new clarinet concerto. This piece was written by Garret Gillingham, a Michigan-based composer. The concert is premiering this piece and will feature Millikin clarinet professor Dr. David Cook as a soloist.

This concerto’s performance will be recorded, and Dr. Seapy hopes the recording can set a precedent of other school orchestras to follow.

“What’s exciting is not only will we be bringing this piece to life for the first time,” Dr. Seapy said. “But we’ll also have him here working with us.”

Gillingham will take a residency in the School of Music. Students can work with him one-on-one in time for the concert.

The MSWE will also be working in conjunction with the Arthur-Lovington/Atwood-Hammond (ALAH) High School band, headed by Millikin graduate, class of 2018’s Ryan Wood.

Dr. Seapy considers this will be a neat experience for his students, especially considering the ensemble has a good amount of freshman in the group. He goes to call this experience a “mega-band.”

“It’s a neat opportunity for them and for us to get to collaborate with featured college musicians,” Dr. Seapy said. “We’re gonna be doing a panel discussion with them and really trying to give them as much time with these great artists and great creative minds as they can get.”

MSWE’s concert will be at the Kirkland Fine Arts Center (KFAC) at 4 p.m. Dr. Seapy hopes to hold a pre-concert conversation around 3 p.m. and also hold it in KFAC.

Both events will be free to the public, so stay tuned, Millikin!