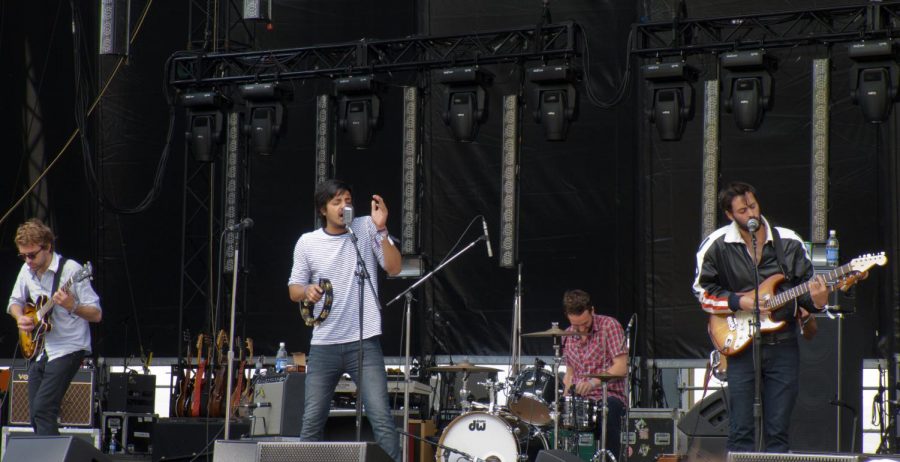 Adding new music to your library every once in a while is something that is very important. Exposing yourself to new music allows you to widen your music horizons and connect with more parts of the world.

Music is something that, as people, we are exposed to every day of our lives whether we choose it or not. Music is always playing throughout stores, coffee shops, at the gym, in commercials, by ourselves, and so many more places. You can’t escape music.

Music is everywhere. Giving music a chance is very important. You never know what you might click with.

Young the Giant, or The Jakes, is an American rock band consisting of five men: Sameer Gadhia, Jacob Tilley, Eric Cannata, Payam Doostzadeh, and Francois Comtois. The group originated in Irvine, California, and it was established in 2004. They are known for making rock, indie, alternative, and indie pop music.

When establishing the group in 2004, it was quite difficult due to the members attending different schools. They had a couple of personnel changes due to this, which made it way more convenient for the group.

In 2009, the band was featured at the “South by Southwest” music festival in Austin, Texas. They also had some of their songs featured in movies and on the Los Angeles radio station, which allowed them to hit big in the music industry.

The band originally went by The Jakes. They changed their name while making their album in 2010. While making this album, they opened for a lot of concerts, such as Minus the Bear and Steal Train. They had a clear idea for their album. They wanted to create music that could be replicated in a live setting. They wanted to be able to give their audience what they are listening to on the album.

Their first album, “Young the Giant,” hit number two on the US Billboard Charts and appeared on other peak charts throughout the world. Their singles, “My Body” and “Cough Syrup,” won platinum in two different countries. “Cough Syrup” also became gold-certified in Canada. It hit number 3 on the US peak charts for alternative, while “My Body” was following right behind at fifth place.

The band currently has four albums along with their many singles. They have numerous music videos released that you can check out online.

The group is scheduled to perform at Coachella next year in January. Tickets are available on their website. They have a merch store linked to their website if you’re ever interested in repping Young the Giant.

Young the Giant has a big impact on the rock and indie industry, and they continue to support the alternative genre with their breathtaking music. They have a very chill vibe to their music. It’s the kind of music you listen to when you’re relaxing or just need a pick-me-up. Their music soothes the soul. Check them out, and hopefully you will add their music to your library!