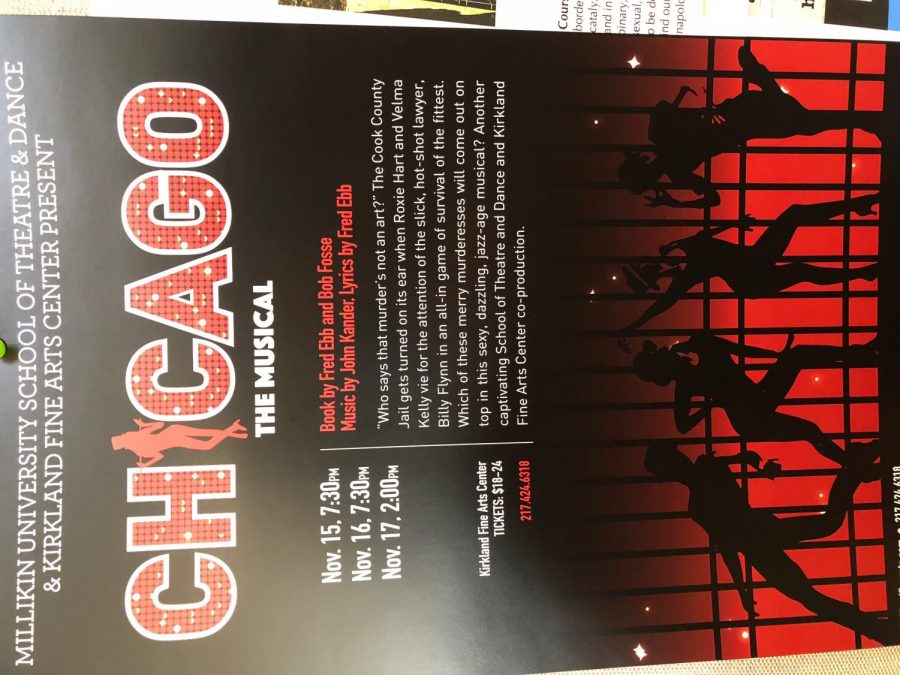 Fame. Sex. Murder. It’s easy to get caught up in “all that jazz,” but for those involved in Millikin’s production of “Chicago,” the show is about much more than that.

“It’s these strong women roles, which is really important for society right now to see these strong, independent women,” Hope Klessig, who plays Velma Kelly, said. “Yes, they are put up as murderers and a little bit crazy, but the crazy thing about the show is that the audience starts to like them.”

“Chicago” follows the story of Roxie Hart and Velma Kelly, two performers who are awaiting trial after murdering their lovers. With the help of extensive media coverage and sensationalist lawyer Billy Flynn, the women soon earn celebrity status, and they will do anything to keep it.

The vaudeville style of the show, accompanied by the distinct choreography of Bob Fosse, has made “Chicago” one of the most popular musicals in Broadway history. The show has sparked several tours, a movie, and a revival.

“I’d say the coolest thing is that even though the show is so familiar to all of us, we’re breathing our own life into the story and the music and bringing new things to it every day,” Maura Fawley, who plays Roxie Hart, said. “It’s really cool how the story will shift and how we’re affecting it.”

Although the characters value fame and popularity above all else, the show’s renown puts some pressure on the performers, who are playing roles that were once filled by some of the biggest names on Broadway.

“The role of Velma is iconic, the role of Roxie is iconic, the show itself is iconic,” Klessig said. “There are all these standards that you’re living up to, and so that’s why it’s important to find your own type of Velma. It’s not copying the other women, it’s letting my own experience inform who that character is.”

Even though its original run was short, the Broadway revival of “Chicago” is one of the longest-running musical revivals in Broadway history. It is well-known throughout the theater world for its sparse set and costumes.

But despite the success of the revival, director and choreographer Sean Morrissey has decided to base Millikin’s production on the show’s original script rather than following the revival.

“There’s no creative challenge to that. It’s just copying somebody else’s work. It’s plagiarism. So I’m not really interested in that,” Morrissey said. “And I’m also a big fan of Bob Fosse, so there’s a reason why he wrote the script the way he did originally.”

Fosse’s choreography is a major part of this show. His distinctive style is rooted in ballet, but the dancers in “Chicago” are not traditional ballerinas. Dancers have to be technically skilled but unafraid to experiment with their craft.

The distinctive feel of “Chicago” extends beyond its choreography. While the plot is heavy, the show itself is a comedy. The performers have to tell the story without forfeiting its style.

“You have to remember that they’re real people while doing it in a heightened style. So putting a little bit of real life into it, but making it vaudevillian because that’s what it is,” Micky McNaughton, a member of the ensemble, said. “It’s a balance. You have to make sure you’re not leaning too far into reality because the reality is just there as the base for the vaudeville that’s happening.”

This, too, differs from what Millikin typically teaches its students. Millikin’s theater students are instructed to prioritize realism and avoid over-the-top “schmacting.” But the elevated style is part of the fun of “Chicago.”

“We’re still working heightening the style,” Morrissey said. “I am confident that we’ll have it where it needs to be for the audience.  But it is a learning curve, trying to do a style that they don’t learn in class.”

In addition to learning the Fosse style, the actors are also tasked with finding a way into these complicated characters.

“I find places where I relate to Roxie and places where I don’t. The seed that I tried to find at the beginning and tried to tie through the rehearsal process is that she’s just this young girl trying to get ahead, and to her, she’s going to do whatever it takes. And I kind of admire that, especially during the 1920s and being a woman.” Fawley said. “That’s kind of been a little bit of a challenge, but it’s also super exciting as an actor when you’re given a character that has depth and levels to them to try to crack them open.”

The story might seem distant in today’s world, but those involved in the show believe that “Chicago” is still applicable. They feel that the media’s fascination with greed and violence, as well as the audience’s eagerness to consume these ideas, is still relevant almost a hundred years after the story takes place.

As opening night approaches, the people who are involved Millikin’s production are are excited for the audience to see the style, but also to understand the implications of the story.

“For Decatur audiences and for the things that we’ve been doing here at Millikin, this is something that they’re not used to seeing,” Morrissey said. “I want them to be visually wowed.”

“Chicago” will be at Kirkland Fine Arts Center from Nov. 15-17. Tickets can be purchased at the Kirkland Ticket Office.