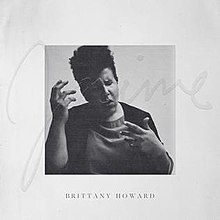 Picture fields of green tomatoes and white cotton whilst Brittany Howard’s elegant yet raspy vocals appear on top of the scene with a quisitive sense of nature. Off of Howard’s solo debut record, “Goat Head” tackles the enigmas that follow the mixed race culture. Subtly, throughout the entirety of the record, Howard finds herself hinting at the common occurrences with her mix of races and the difficult matters that trail behind them.

The frontwoman from groovy alternative rock/soul/funk group, Alabama Shakes, Brittany Howard has teased a solo album for years, but finally delivered with the release of the spacious and introspective “Jaime”.

Offering bits of indie and others of the R&B/soul culture, Howard fuses these genres into one alternative culmination of spastic sounds and lyrics that filled with baggage.

“History Repeats” kicks off the album with an infusing funk-esque guitar solo and groovy lyrics that showcase the broad range of styles Howard is keen to and not afraid of pursuing. While, “Georgia” takes a different route with an excess amount of soul and a laid back groove that carries recognizable thoughts along this journey full of commodious interpretation.

Ranging from one style to the next to the complete opposite, Howard centralizes on the evoking emotional subjects that appear throughout each tune. The listener can dictate a variety of moods with songs such as “Tomorrow” possesses an eccentric shuffle accompanied by flourishes of strings.

While, “Short and Sweet” falls into a category of its own with an acoustic backdrop, non-filtered vocals, and raw lyrics that invokes the goosebumps that crawl down the spine.

After a cross country drive from Nashville to a miniscule house in Topanga, California, Howard had the inspiration to create a record that is titled after her late sister who taught Howard how to play the piano and write poetry. Howard insists that the album is not in memoriam for her sister, but the title is indeed in honor of Jaime who passed away from cancer as a teenager.

Instead, “Jaime” is dedicated towards Howard, herself, who felt that she needed to record and release this record by herself and for herself because as she describes it, “I’m pretty candid about myself and who I am and what I believe.”

The record captures the self-expression and detail that is intertwined within each tune. Howard’s personal self and brain can be heard floating throughout “Stay High” as a sense of attribution towards her significant other and appears during choruses of “Run to Me,” the drum filled alternative adventure that grasps the topics of loneliness and a need for that close warmth.

“Jaime” shares the stories that Howard has encountered throughout her lifetime and expresses them with a sense of ease as occurring riffs accumulate and reminiscent lyrics start to twirl amongst the speaker. Brittany Howard outdoes her candid self with this vast and widely interpretive indie soul and R&B album.