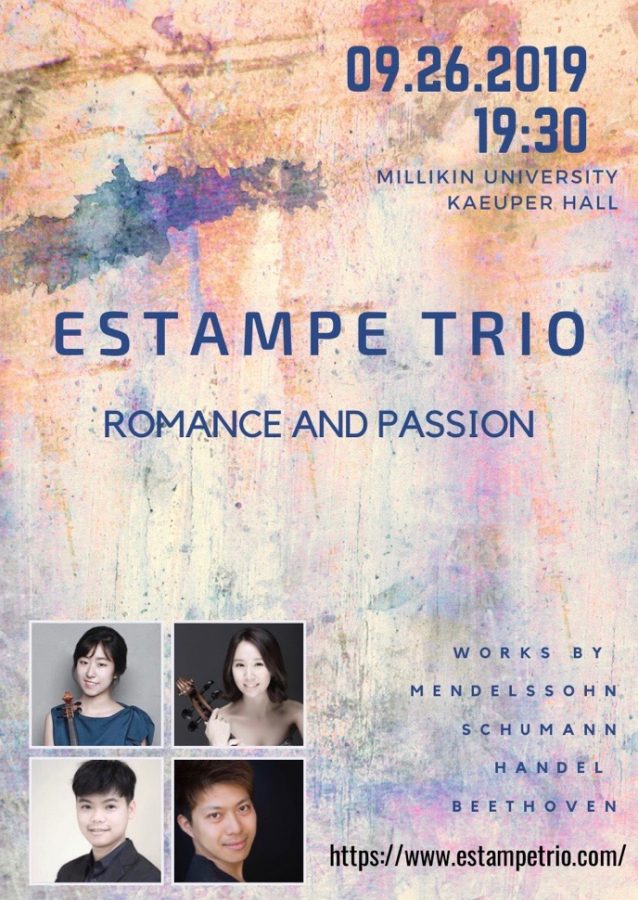 On Thursday, Sept. 26, the crowd in Kaeuper Hall fell silent as three musicians took the stage. The group – a pianist, violinist, and cellist, sometimes accompanied by a singer – played several classical pieces in a guest artist recital entitled “Romance and Passion.”

The group is clearly skilled, their reputation bolstered by wins at prolific chamber music competitions. Since 2016, they have been performing throughout central and southern Illinois, and they recently released an album.

According to the program, they want “to make classical music more appealing and accessible to the audience.”

I settled into my seat with no idea what the next hour would bring. As the musicians took their places and launched into their first piece – Piano Trio in D minor, Op.1 No. 1 by Robert Schumann – I realized that I was in for an evening of beautiful, emotional, and complex music.

The night began with Mickey Chien, the pianist, onstage with violinist Eunjeong Choi and cellist Yeonwoo Seo. They played perfectly together with a synchronization that suggested hours and hours of rehearsal.

Other than a single glance before beginning, the only communication they shared was between their instruments. Clearly, talent and practice helped shape their perfect collaboration.

But despite their fellowship, each musician seemed thoroughly alone. This might be the nature of the music they were playing – classical music always feels solitary, somehow –  but I think that their intense talent and focus are the real reasons why each musician seemed to command the stage on their own.

They were engrossed in their instruments and the music that they were producing. Most likely, these musicians have been playing their respective instruments for years. Their music is their lives.

Because of this, it felt like we were witnessing three separate, heartfelt relationships between each musician and their instrument. The fact that these instruments combined to produce beautiful music did not seem to break their focus.

At various points throughout the concert, singer Yichen Li joined the musicians. Li is a countertenor, and his clear, strong voice commanded Kaeuper. His gestures and expressions conveyed emotion that helped give definition to the theme – “Romance and Passion” – in a way that it sometimes lacked when Li was not onstage.

At first, one might blame the stoicism of the musicians for why this theme was occasionally difficult to discern. But actually, their intense focus on the music was nothing less than passionate. They were concentrating on the technicality of the music, and this is why Li’s expressionistic voice and movements were so refreshing. But that shouldn’t lessen the emotions that the musicians conveyed in their playing.

The musicians’ engrossment in the music was particularly obvious in the high points of the show. During difficult portions, Choi and Seo moved their heads in time with their bows, and Chien practically bounced in his seat. Their entire bodies were involved in the playing of this music, and their movements prove that classical music can be just as much a visual art as it is auditory.

The audience reflected the musicians’ passion. Almost forty people attended the concert, half of them were students and half community members. The music of Schumann, Händel, Beethoven, and Mendelssohn filled the darkness and surrounded us as we sat somehow both connected and alone, much like the musicians on the stage.

One man propped his chin in his palm. His eyes never left the stage. A woman sat completely still with clasped hands. A few seats down from me, another man breathed in time with the music, his intakes of breath sharpening with every unexpected crescendo. Clearly, the audience was enthralled.

At the end of the night, Kaeuper exploded into applause, and the audience jumped to their feet for a standing ovation. As the musicians bowed, Choi gave a small, pleased smile. This smile was recognizable to anyone who plays music – the excitement of playing music that you chose on the instrument that you love, and playing it well.

In a recital full of passionate, beautiful music, this gesture felt like the most moving moment of the night. The audience smiled back.