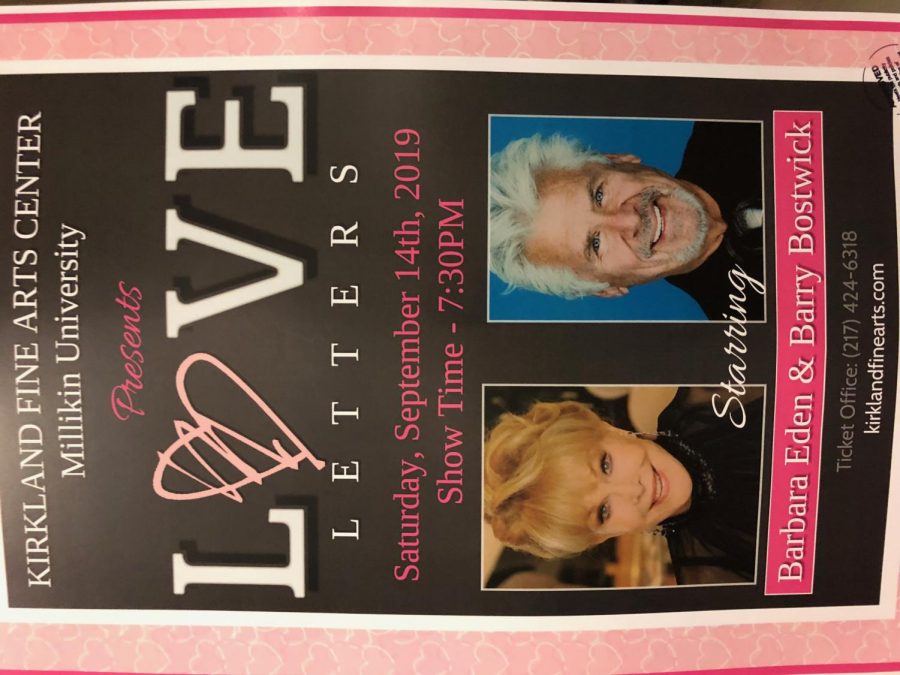 On Saturday, Sept. 14, 2019, Kirkland Fine Arts Center welcomed Barry Bostwick and Barbara Eden to the stage to perform “Love Letters,” a play by A.R. Gurney, for one night only.

The play begins in the late 1930s when the pair are elementary school classmates. The next fifty years fly by as they attend separate boarding schools and colleges and ultimately choose different lives. Melissa grows up to be an alcoholic artist, estranged from her kids. Andy becomes a U.S. Senator with the perfect nuclear family.

But what makes this story really interesting is the format in which it is told. The characters sit beside each other and read the various invitations, postcards, letters, and Valentine’s Day notes that they send to one another over the years. From these writings, the story emerges.

I had never seen a play like this, and I expected it to be confusing at first. However, the format proved to be easier to follow than I thought. The audience accepted it wholeheartedly, and it wasn’t difficult to understand how the characters felt or what was happening in their lives.

Not only that, but telling this story through the characters’ letters turned out to be interesting, personal, and surprisingly moving. It mattered what they wrote in their letters, but there was a quiet significance surrounding what they didn’t write, too. The play’s format heightened its emotions in this way.

I was surprised to find that there were several laugh-out-loud moments as the characters bumbled through childhood and adolescence. Andy and Melissa’s fights, while powerfully angry at times, were often undercut with funny sparring and crude insults. The actors played off each other without abandoning the format of the letters.

While the writing is good, Bostwick and Eden should be credited for this production’s success. Bostwick is known for playing Brad Majors in “Rocky Horror Picture Show,” and Eden’s claim to fame is her role as Jeanie in “I Dream of Jeanie.” Their relative celebrity was a major pull for the audience, and KFAC was packed with more community members than Millikin students.

The actors deserve great praise for their performances. They managed to access different parts of themselves to play the various iterations of their characters. With each age, they portrayed characters who felt raw, desperate, familiar emotions. The characters grow and learn how to deftly manage their feelings, and the actors reflect this in their handling of the material.

Bostwick and Eden fully embraced their characters and delivered touching performances. As Andy and Melissa fought with, confided in, and fell in love with one another, the audience began to fall in love with them, too.

This, then, is the magic of “Love Letters.” It is the story of two people who never quite find their timing, and it hurts more than you expect. In fact, these scenes are actually some of the most compelling. College-aged Andy and Melissa try to detangle themselves from each other and make sense of their relationship, and this process is echoed toward the end of the play after fifty years have passed. Their love is real, but that doesn’t make it salvageable.

Bostwick and Eden portray characters who try to connect while keeping their cards close to their chests, and the resulting story is a moving, haunting reminder of what we risk when we speak – and what we can lose when we don’t.