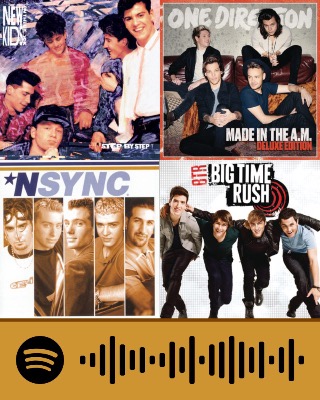 One of the best parts about this time of the year is the weather and how beautiful the outside world becomes. Along with this wondrous thing called nature, the school year is in its final stages and summer is near although this happens to be the hardest spot down the stretch. This week’s playlist is meant to help the listener through these times of struggle and longing for summer while going back to their roots and channeling their inner childhood and fangirl. Phenomenon is for all the hidden and quite obvious fans of some of the best boy bands throughout this century.

“Tearin’ Up My Heart” – *NSYNC: Yes, they’re definitely the best boy band ever and should always be remembered. (Can you smell the favoritism?) With several hits and three studio albums, the five-piece band continued to top the charts with each new release and always found a new heart to steal. “Tearin’ Up My Heart” was one of their earliest tunes and their first real big hit that made some noise on the charts. This jam features an infectious groove, harmonies of beauty, and choruses that will never leave the mind. *NSYNC hopped onto the boy band train early on and assisted in forming what the world knows of and about boy bands today.
“Boyfriend” – Big Time Rush: Rising around the same time as One Direction and becoming the second coming and Nickelodeon’s version of the Jonas Brothers, Big Time Rush took over the world for a few years with their television show and the debut album that showcased this quartet’s talents. “Boyfriend” climbed the charts and even featured Snoop Dogg in an exclusive release of the tune. With an infectious groove, the repetitious “boyfriends” fade in and out while the chorus enters and garners all the listener’s interest. Thanks to a satisfying vibe and lovely vocals, Big Time Rush swooned numerous amounts of hearts with their bop, “Boyfriend.”
“Step by Step” – New Kids On The Block: The five-piece boy band led by Donnie Wahlberg came to notice in 1986 and helped establish the term “boy band.” Since their beginnings, New Kids On The Block have been off and on in recent years and have found their names back on the charts a handful of times. “Step by Step” was one of the first classics these five teenage heartthrobs presented to the world. With a downright sick groove, “Step by Step” presents a catchy melody and innovative synth lines.
“Drag Me Down” – One Direction: The five lads from the UK were one of the more recent boy bands and also one of the most popular if not the most throughout the decade. One Direction were formed by Simon Cowell, a judge on the X-Factor UK, who sought out the five boys during the run of the show. The rest became history for the group as they took over the world and captured millions of teenage girls’ hearts. “Drag Me Down” features a different and never really heard before groove by One Direction and allows for them to not hold back. Along with that, the tune offers a rocking groove and lyrics that leaves everyone singing.
“As Long as You Love Me” – Backstreet Boys: Quite possibly the most popular or second most popular boy band of all time, the Backstreet Boys have since their heydays returned and succeeded in their comeback. “As Long as You Love Me” contains similar vibes from most Backstreet tunes while mixing in more of a mellow mood and another chorus that instantly becomes memorized and a catch for the ages.
“All Time Low” – The Wanted: Much more popular in the UK, The Wanted gracefully made their way into the United States and began to slowly yet surely take the country by storm. With their self-titled debut record, The Wanted started off on the right foot and instantly started to have their songs covered, played on the radio, and even used via other sources of media. With being another hand-picked boy band, the quintet came together and continued the boy band tradition in both the UK and the US. “All Time Low” consists of melodic harmonizations, beautiful string accompaniment, and a chorus that will forever rock.
“S.O.S.” – Jonas Brothers: Just had to do it to them. “Sucker” declared the Jonas Brothers’ comeback and return into the limelight, but going back to one of their classics was necessary. The Jonas Brothers helped bring back the term “boy band” when they arrived in 2006. “S.O.S.” exhibits verses of full pleasure, melodious riffs, and a chorus that will always be remembered and forever sung no matter the location or the occasion.
“MMMBop” – Hanson: Back in 1997, this group of three long-haired, blonde teenage heartthrobs stormed the music scene with their extremely catchy single, “MMMBop.” Ever since the rest has been history for the trio of brothers as the tune became their biggest hit and continues to be to this day. “MMMBop” captures the raw effects of young vocals whilst fusing them with one of the catchiest and most memorable choruses of all time and in the end, creating a simple tune that distributes effects of complexity.
“Valentine” – 5 Seconds of Summer: After starting out mostly pop punk, the quartet has since developed themselves into an absolute pop-rock powerhouse. 5 Seconds of Summer represents the modern age of boy bands and dictates the evolution of and the phenomenon that is the boy band. “Valentine” showcases eclectic grooves, riffs of steel, and lyrics that possess so much awesomeness and truth. The listener will find themselves buried deep into the hypnotizing rhythms and swaying vocals.