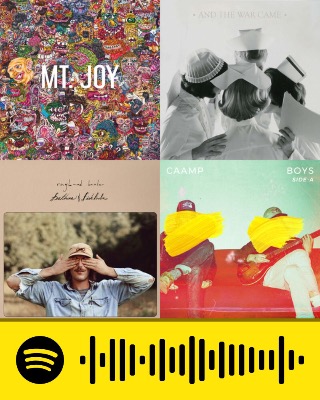 Folks, spring is finally and officially here so bring out the shorts, tank tops, Hawaiian shirts (a personal favorite), and those good ol’ laid back vibes. This week’s playlist touches on the inner beings of folk music by reaching out to each region and pulling them in to create the perfect “here’s spring” playlist. Folk Sweet Folk catches the bittersweet moments where the windows are finally down and the music’s turned up to the late spring nights where a light jacket is preferred and deep thoughts surround one no matter the direction taken.

“Hey Joe” – Caamp: The day has just begun and the sun is shining quite beautifully as the birds chirp here and there. “Hey Joe” instantly becomes a go-to start of the day type of tune as the first verse executes such simplicity and effortlessness. This relaxing jive brings the listener to bliss as the raw, raspy and truthful vocals soar throughout the track with a backing banjo assisting in creating the ultimate morning experience. The rise and fall of the final verse resembles pure joy and beauty as if “Hey Joe” is the most accurate representation of a cool, breezy spring morning.
“Driveway Melody” – Rayland Baxter: The morning is almost over and the afternoon is looming as Rayland Baxter’s tribute to his grandma, “Driveway Melody” offers optimistic grooves and lyrics full of curiosity. With each chorus, the listener becomes engulfed into the song’s atmosphere as the windows go flying down at noon and the smell of lunch sneaks its way into the vehicle.
“Julia” – Mt. Joy: Lunch has come and gone and the perfect spring day is already in full swing as the afternoon is reaching its peak. Mt. Joy’s indie folk, laid back, sing-along tune “Julia” consists of catchy and peculiar lyrics, choruses full of soul and realization, and grooves that mold terrifically with a spring afternoon. “Julia” entertains the listener by speaking from experience and producing vibes that seem to carry one throughout the day.
“House of Winston” – Shakey Graves: Approaching the late afternoon portion of the day calls for hypnotic grooves and melodies filled with confusion and oddity. After a long morning, “House of Winston” fulfills all the late afternoon thoughts one possesses and then some as the chorus speaks on behalf of one wanting to waste another’s time. Shakey Graves provides feelings of want and hope whilst mixing in grooves that contain hints of pure folk and thought bubbles that reveal the unconscious notions that one hopes will never leave the mind.
“Nothing Is Real” – The Milk Carton Kids: By the early evening, one often begins to question their day, actions, and unfortunately even their own life. But spring provides one with these feelings of happiness and elation as the sunset forms this ring of pink, purple, and orange miraculousness and the sounds of graceful folk rhythms help alleviate the negative content. “Nothing Is Real” portrays the fact that everything in the world is simply not real, but one shouldn’t mind as there truly isn’t an efficient exit off this ride. The Milk Carton Kids ponder what comes after life on Earth and begin to question if anything has ever been real by supplying details with lyrics of raw candor and frankness, vibes of dissuastic integrity, and an overall state of uncertainty and questioning.
“Liberty Street” – The New Basement Tapes: This star-studded reenactment of lost and forgotten Bob Dylan tunes that never made it to the recording studio contains hints of glamour, glory, and a state of everlasting curiosity. The New Basement Tapes portray these never before heard Bob Dylan tunes by capturing the Dylan-esque mood of lovely folk melodies, wondrous harmonies, and lyrics filled with exceptional observations. “Liberty Street” continues a trend of evening vibes where thoughts are mellow and the sun begins to lower in the sky as the lyrics solicit inadvertently ravishing meanings and tales.
“Crazy World (Judgement Day) – Jamestown Revival: Newly released and extremely accurate, Jamestown Revival’s single incorporates modern day problems and skepticism as the country slowly falls to pieces. “Crazy World” ponders whether or not judgement day is overdue and describes their reasoning behind the thought. With brutally honest lyrics, “Crazy World” depicts the most accurate representations of our insane and demented unfortunate world. The end of the evening slowly fades into the distance as thoughts of how can the world get any worse races throughout each listener’s mind.
“Can’t Be Happy for Long” – The Lone Bellow: The sun is setting and dinner is fast approaching as the evening lingers on and the night becomes owner of the sky. The Lone Bellow’s “Can’t Be Happy for Long” executes upbeat, feel-good vibes, but counteracts them with lyrics of regrettably knowing one can’t be joyous and pleased forever or a long period of time. “Can’t Be Happy for Long” offers generous grooves and lyrics of reassurance.
“Another Life” – Brett Dennen: The night is concluding and the moon begins to tower over the Earth as a slight breeze encaptures Mother Nature and her children. “Another Life” dives into the wonders of other lives and that maybe in a different life or alternate universe, one could be happy or two could be lovers. Brett Dennen sends the listener into in-depth, late night talks with ‘Another Life” and it’s lyrics of hopefulness and grooves of stability.