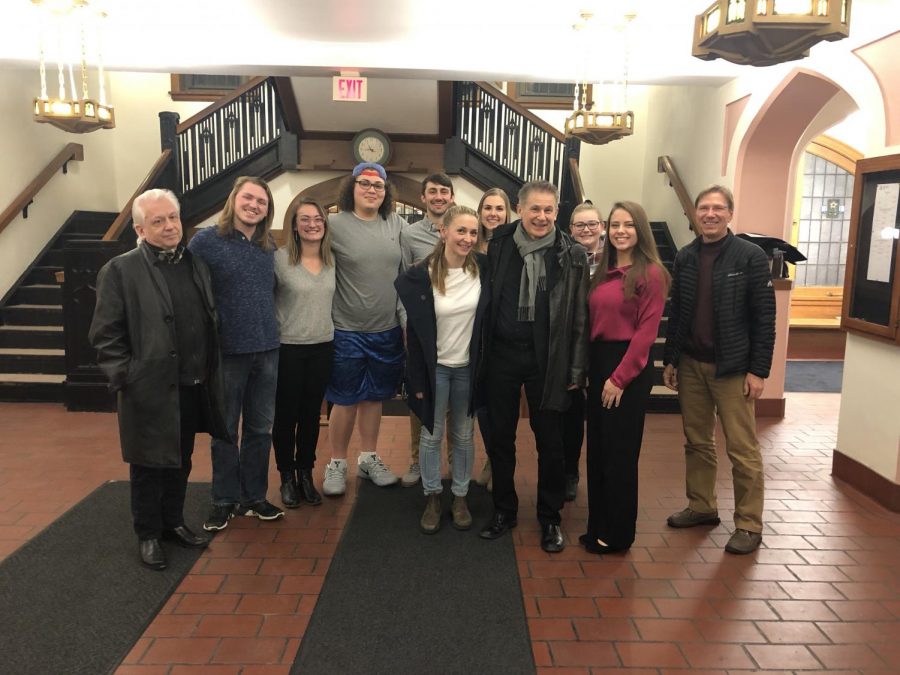 On February 18, also known as President’s Day, Millikin University had two visitors on its campus. One is an iconic international contemporary saxophonist, Daniel Kientzy and the other being a Canadian and world-renowned professor, saxophonist, and lecturer, William Street. Kientzy and Street made a visit to Millikin to kick off their tour of performing and lecturing at Midwest universities.

Along with the two accomplished saxophonists, Street’s accompanist, Viktoria Reiswich-Dapp was part of the group and showed the audience her talents later that Monday night during the recital held in Kaeuper Hall in PMC.

Throughout the day, there were three events held not only to relish in the glory of having these extremely successful and effective musicians but to offer opportunities for learning and for the possibilities of advice being given. Inside of Pilling Chapel, the first of two events inside the hall was a saxophone masterclass where select saxophonists in Millikin’s studio performed a piece they had been working on throughout their lessons with Dr. Perry Rask, Millikin’s saxophone professor on campus. After each piece was played, the student would wait to be critiqued by Street and Kientzy where they seemed to perform a sort of “good cop, bad cop” ritual.

The masterclass lasted around an hour and a half then was followed by a lecture later that afternoon in Pilling. Kientzy, a French man, needed translation as his English wasn’t particularly great and that’s where Street becomes a nice addition to the team as he serves as a translator to many professional international saxophonists such as Kientzy. The lecture tackled Kientzy’s works over his career and how he pursued and entered into the world of contemporary saxophone.

At the end of the lecture, students and fellow lecture attendees had the ability to ask Street and Kientzy questions about the subject matter discussed and presented and anything that else that came to mind. The day’s events were over with after the lecture and this allowed time for Street to go and warm up for the recital later that evening.

The recital brought contemporary saxophone music to life in Kaeuper Hall as randomosity, peculiarness, and even eccentricity filled the hall. Odd sounds, dissonant pitches, and even the weirdest of interactions and occurrences between Street and Reiswich-Dapp were spotted and witnessed.

The five piece recital lasted around an hour or so and seemed to amuse the audience in many ways. From lots of non-musical technicalities to the pianist blowing into Street’s horn, this recital seemed to not only be one of the oddest yet one of the most creative and innovative recitals ever held on Millikin’s campus. Street entertained the crowd with barely playing at all throughout the first piece and by practically just blowing through the horn.

The second piece titled, Tour de France written by Alfred Joel Fisher in 1990 featured four movements of repetition each movement respectively and a fluctuation of moods exhibited on the horn. The third and fourth pieces executed the strangeness of contemporary music perfectly and allowed for Street to play his horn, but adds dissonance, mismatched pitches, and repeated rhythms throughout the pieces.

Including a premiere, the music selected for the recital was a wondrous delicacy as well as an odd yet pleasing matching and contrasting of modern contemporary saxophone music. Street delivered the final piece, Nekrotzar’s Answer by Andriy Talpash, with a sense of optimism and confidence. The seven part piece written for saxophone and piano involves short movements that include bits of discordance and cacophony as well as the continuation of unmatched pitches and pockets of questionable melodies.

This guest artist recital presented by SAXO (Millikin’s Saxophone Studio) allowed for students and members of the Decatur community to not only meet and hear William Street and Daniel Kientzy lecture and play, but also had the opportunity to receive feedback from two professionals and gain a wide knowledge about the rise of contemporary saxophone music as well as the ability to experience contemporary saxophone music firsthand.