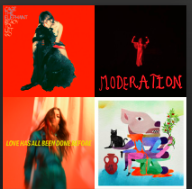 Even though February may be the shortest month on the calendar, it definitely feels the longest in reality. Despite the long, grueling cold and event after event lined up, music is always here to maintain some sanity. This week’s playlist features tunes all released in the new year, bound to be rocking the indie charts for months to come. So sit down, do some homework, and let this laid back, all new indie playlist do its magic.

“Ready To Let Go” – Cage The Elephant: The boys are back and still too good. Cage The Elephant announced about two weeks ago the release for their new record, “Social Cues” and gave us a sense of the album with their new single “Ready To Let Go.” Filled with the classic Cage-esque riffs and ultimate indie rock vibe, “Ready To Let Go” becomes this insanely addictive and mesmeric tune that grabs and maintains the listener’s attention.
“Moderation” – Florence + The Machine: This hot new single released by Florence + The Machine has top of the charts written all over it. “Moderation” takes a dive into the indie pop world and rises to the surface with success as every chorus brings together flares of vocal domination and grooves of steel. Caution: the repeat button sometimes sticks.
“Love Has All Been Done Before” – Jade Bird: An up and comer from England, Jade Bird has quite the future in the indie world. “Love Has All Been Done Before” is just one of three new singles that will be featured on her record that comes out later in the year. With an obvious sense of pure talent and vocals of heavenly beauty, Jade Bird captures the listener with her belts of hypnotic flavor and lyrics of impeccable wisdom. Stay tuned on Jade Bird, there will be more of her in 2019.
“NYC” – JR JR: It’s been a few years since JR JR really took the airwaves by storm and they are most certainly back. Along with “NYC,” the group released “Day In, Day Out” hoping to release a new record later this year. “NYC” contains laid back vibes, flowing lyrics, and a groove that wraps around the listener’s body and forces them to sway back and forth.
“They Own This Town” – flora cash: The married duo already found themselves at the top of the indie charts at the end of 2018, but they are not done quite yet. In hopes to release their debut album in 2019, flora cash gave their listeners “They Own This Town,” and it’s pretty good compensation while the full length record is in the final stages. “They Own This Town” starts off simple and isn’t much, but as the first chorus kicks the tune into gear and that’s when the listener becomes obsessed with the groove. The intoxicating vibes and pleasurable, yet barely noticeable, lyrics urge the listener to move closer and to turn up the volume.
“Leaning On Myself” – Anna Of The North: From the start, the groove approaches the listener suddenly and has them entangled into swaying side to side. “Leaning On Myself” showcases simplistic yet beautiful vocals and lyrics that provide so much truth and honesty.
“Away We Go” – Bad Suns: The four piece indie rockers decided to mix things up with their style by going for a little more laid back feel and less indie dance-esque pop. “Away We Go” features light, effortless indie rock grooves intertwined with pop rock vibes and a beautiful piano interlude throughout the intro.
“Longshot” – Catfish and the Bottlemen: A classic move for Catfish and company is repeats at the beginning with the vocals being spat in the face of the listener. The chorus brings everything together and drives the listener to pay closer attention and sway . “Longshot” features the more dialed back side of Catfish and the Bottlemen along with catchy lyrics and a chorus that will have the listener go into a frenzy.
“Pearl Cadillac” – Gary Clark Jr.: The man himself is back and boy, does he still rock! “Pearl Cadillac” offers the listener sweet, delirious vocals, flowing rhythmic guitar lines and an overall ravishing sound. Gary Clark Jr. provides the necessary needs for the listener to adore this modern day rock and roll tune that seems to never get old. With haunting vibes, the outro fades into the mist and encourages the listener to listen again and again.