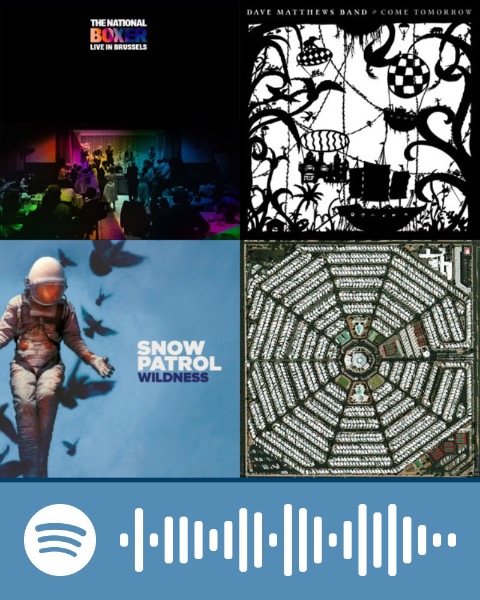 Scan the image with your smartphone to instantly find Caleb's Weekly Playlist!

Thanksgiving is near, and last week’s parental guidance gave students something to look forward to during the next break. With a week left till the holiday filled with the best food, let’s crank out some alternative jams to keep everyone rocking through the next week and try to send some chill vibes so students can take a deep breath and just relax. Featuring songs filled with fantastic lyricism that prompts one to sing, and other tunes that seem to wander in the mind and ask for one to really think about the deeper meaning.

“Do You Remember” – Dave Matthews Band: Off their recent record released back in June 2018, Dave Matthews Band surprised fans by coming out with a mixture of their original sound as well as some new flavors. “Do You Remember” showcases the legendary Dave Matthews vocals as always and one of the greatest drummers of the century, Carter Beauford, to do his thing and jam out. Every rise of the chorus begs for the listener to sing along, and one starts to fall under their hypnotic spell and might be convinced to reminisce a little bit.
“Don’t Give In” – Snow Patrol: With another release by the forever underrated and only known for “Chasing Cars,” Snow Patrol has always possessed the ability to make a great, catchy tune that deserves to be heard by everyone. “Don’t Give In” is just that and more as this light and easy tune soared on the alternative charts and it’s way into the minds of listeners everywhere over the summer .
“Apartment Story (Live in Brussels)” The National: After the anniversary of their iconic record “Boxer,” The National decided to perform an entire live set in Brussels. “Apartment Story” not only features peculiar lyrics, but at the same time quite meaningful and bigger picture lyrics that really urges the listener to dig deep and evaluate the overall essence and message of the tune.
“Lampshades on Fire” – Modest Mouse: Right from the get go, Modest Mouse captures the listener with an odd entrance that seems to attract listeners more than shoo them away. A little bit of the chorus becomes a recurrence and seems to ignite the rest of the tune. The listener continues to show interest and is drawn closer to the steady groove and lyrics of pure sweetness and genius. “Lampshades on Fire” delivers brilliant lyricism, insane harmonicism, and an overall feel that just can’t be replicated.
“Return to the Moon” – EL VY: A duo consisting of the lead singer of The National, EL VY stormed the country with this mesmerizing and spellbinding hit “Return to the Moon.” With a constant groove and lyricism at its finest, the listener is exposed to swell music that leaks out of the surrounding speakers and fills the room with a ravishing sound that pleases the listener.
“Rockin’ the Suburbs” – Ben Folds: This mastermind changed the game of music by bringing his genius to the industry, and “Rockin’ the Suburbs” only increases his intelligence and popularity. The listener becomes aware of every little detail in the tune as it is adjusted to be as audible as possible. The eccentricness of the lyrics bring an entirely new and insanely cool level to the tune, and it rubs off on the listener as they sing and dance along.
“The Ghosts of Beverly Drive” – Death Cab for Cutie: Slowly, the fade in begins, and this tune immediately kicks off and starts on a roll. With lyrics spitting in and out of each speaker and the guitar riff leading into the next verse following it, “The Ghosts of Beverly Drive” is a groove that is unreplaceable and almost unimaginable with a chorus that has every listener trying and begging to sing along with it.
“Grinder” – Gary Clark Jr.: The modern day Prince of blues and that good old southern rock n’ roll, Gary Clark Jr. has this way about him that somehow grabs the attention of every listener. His liquidy gold vocals that are so smooth and eloquent glide over the airwaves and flow right through the speakers. As “Grinder” sticks the brilliant and fascinating guitar solo onto the listener and encourages them to devour every last bit of it until the final quick fade out.
“Anna Begins” – Counting Crows: Quite possibly, one of their most underrated tunes, “Anna Begins” offers the listener deep, mind-boggling lyrics, and a groove that will have one swaying side to side every time. The lyric “kindness falls like rain” echoes through the speakers, resonating off the inner parts of the listener’s brain and allows for them to truly think about the hidden meaning. Counting Crows create this atmosphere of total bliss, and it becomes impossible to imagine a better feeling than the one received when listening.