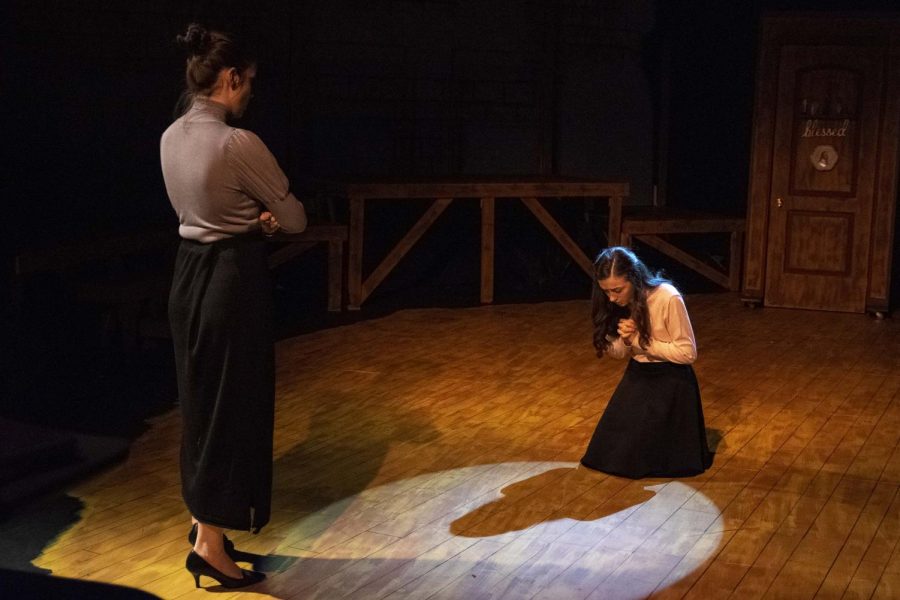 Taunts and imitations of Carrie White can be heard around the room as the lights begin to flicker. Enter Susan, a fellow classmate of Carrie’s that believes if only she hadn’t done that one thing the whole world would still be attached. A strange feeling can be sensed as Susan begins to tell the story of what happened on that night in May.

Carrie features an incredibly talented ensemble that perfectly blends with each other both on and off stage. With constant changes in mood, Carrie catches the attention of all viewers every second by the outlandish humor, marvelous singing, and the retro meets modern day dancing. The reality of this old story being brought into modern light seemed at first daunting and almost impossible. Yet, Carrie succeeded expectations.

Every actor and actress held their own weight by exemplifying their duties on stage and becoming one with their characters. It seemed hard to imagine that each individual was actually acting as someone else.

The choreography is twisted with moderness and unique qualities that make it unlike any other moves seen in a show nowadays. The brilliance of the dancing draws the viewer in closer and paints this picture of Carrie that becomes realistic and almost impossible without the moves that occurred.

Carrie’s vocalists surprise and amaze one with the abilities and natural endowment and gift that each performer possesses and releases onto the audience. The choruses sung by the full ensemble are filled with power and packed with punch. The duets and solo songs are found to be even more thrilling and fascinating as they contain so much emotion and rawness to every lyric.

Along with the tremendous dancing and spectacular singing, the casting must be awarded a compliment too. Every character including the ones part of the ensemble seemed to be casted in near perfect personas and roles that each actor and actress best represented and truly were. Due to the terrificity of the casting, the chemistry on stage became visible to the eyes of the viewer and created this beautiful atmosphere of believing what you were witnessing and feeling was real.

The raw and unpolished story of Carrie is told through the eyes of the young and foolish yet remarkably knowledgeable and confident teenager, Susan who is thrown into the world of Carrie White and feels obligated to fix everything. The path Susan takes is not only daring, but awful noble as she treks on this journey to let Carrie feel like she fits in.

Thanks to well-timed humor, laughter fills the room at the perfect times and exits right when the scene becomes dim and the mood starts to lower itself to a deep slumber of sadness. The unsung heroes lead this cast of extraordinary characters filled with deceit, kindness, and for a few hatred. Good and accurate rhyming of each song allows the viewer to not only become enamored with the catchy and quirky tunes, but also find themselves remembering the certain rhymes that tend to recur and feel enforced on the viewer to recall.

Carrie is a sweet, pure, and innocent young girl that turns into this strong, defiant figure that is to not be reckoned with once the event occurs.

Pipedreams’ Carrie takes the classic story of a teenage girl who discovers she possesses supernatural powers and develops the tale into a modern day high school account that features a mixture of humor and suspense. Filled with twists and turns, the viewer never seems to be distracted nor lost in the telling of this heart melting, gut wrenching, and self reflecting masterpiece that is Carrie.