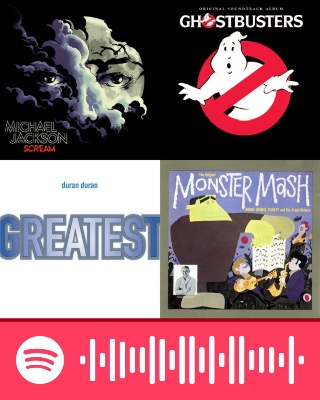 Halloween is approaching, and that means this week’s playlist will be consisted of some of the best themed tunes for this terrifying holiday. Along with some Halloween classics, expect some underrated favorites that will help set the stage for this playlist to scarily become a fan favorite.

“Thriller” – Michael Jackson: An absolute classic and by far one of the most well-known songs in history, “Thriller” brought music and spookiness to a whole new level when it was released. Funk became introduced and intertwined with Halloween and has found itself continuing to be used and experimented with. Jackson only gained his popularity with this smash hit that finds itself being played at events all over the country and throughout October every year. With contagiously scary grooves, “Thriller” will have consumed one’s body by the first chorus and will have every listener dancing in no time.
“Ghostbusters” – Ray Parker Jr.: The smash hit for the classic movie that continues to be spread to each new generation, “Ghostbusters” is not only one of the catchiest tunes of all time, but it’s also one of the grooviest. The synth-pop gestures and riffs set the tone for this heroic theme song for a bunch of nerds that want to save the public from ghosts. This song will have the listener singing and dancing before it even begins.
“Somebody’s Watching Me” – Rockwell: The 1980’s were a great time to be alive especially for the creepy and iconic “Somebody’s Watching Me.” Rockwell’s synthesized cult hit has found itself used for all sorts of entertainment and the trend of usage hasn’t slowed down one bit. With Michael Jackson’s vocals, “Somebody’s Watching Me” features insanely groovy vibes and lyrics that are hauntingly surreal. The listener will not only immediately become terrified, but will be dancing non-stop as well.
“Monster Mash” – Bobby “Boris” Pickett & The Crypt-Kickers: The ultimate Halloween tune, “Monster Mash” is played all over the country every October and will never be forgotten. This silly and somewhat odd recording has been considered a classic and a family favorite with it’s simple and poorly recorded sound effects. The listener will be singing this tune all day long and the “Monster Mash” will never leave the brain.
“Hungry Like The Wolf” – Duran Duran: It’s time to feature some 80s New Wave that changed the genre’s scene and shocked fans all around the world. “Hungry Like The Wolf” dives into new territory and gives the listener infectious grooves along with a slight discomfort in the stomach from the strange and somewhat alarming lyrics. This 80s hit has every listener singing and dancing and occasionally looking behind the back.
“Werewolves of London” – Warren Zevon: It may not be an official Halloween song, but who cares! This classic rock hit, “Werewolves of London” offers the listener catchy lyrics and a constant groove that never gets old. The piano riff allows the listener to start to dance and with the addition of the howls, the listener slowly becomes panicked of what could be around the corner.
“Hells Bells” – AC/DC: From the beginning, AC/DC has the listener on the edge of their seat with the ever so spooky and ominous bells. Slowly, the listener is pulled into the groove that becomes established once the vocals come in. The chilling lyrics confront the listener and catch them off guard. “Hells Bells” is a peculiar and strange tune that rocks and delivers some eccentric vibes.
“Zombies” – Childish Gambino: Even though it doesn’t seem like a hit for this time of the year, it most definitely is. This shuddering hit exhibits all of the features that a frightful tune needs. “Zombies” is genius and perfectly catches the listener off guard with its uneven texture and lyrics. Gambino’s luxurious vocals send hauntingly beautiful vibes to the listener and gets them to check twice on their surroundings.
“Psycho Killer” – Talking Heads: The 80s were a great time for synth-pop and alternative hits to rise to the top of the charts. “Psycho Killer” might be the strangest tune on the playlist and that’s a bold statement. The Talking Heads’ eccentric lyrics and extremely terrifying grooves carry the listener and gets them to dance and sing along. This underrated Halloween hit will have students all over campus questioning their friends’ state of minds.
“(Don’t Fear) The Reaper” – Blue Oyster Cult: Yes, this song had to be on the playlist, and there are no regrets. Blue Oyster Cult’s cult hit “The Reaper” features lots of constant cowbell and lyrics that have truly never been sung before. With strange guitar riffs, but at the same time exceptionally groovy ones, Blue Oyster Cult finds themselves with an obnoxious amount of listeners grooving to this eerie tune.