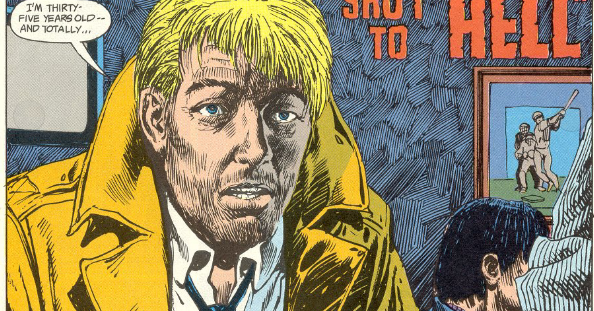 A witty trench coat-wearing Brit from DC Comics’ more magical side, John Constantine is a superhero who has spent an over 30 year run dealing with magical and spiritual problems in DC’s world. First debuting in “The Saga of the Swamp Thing #25” in 1984, Constantine ran most of his career in DC’s Vertigo print and later moved over to the mainstream DC Continuity. John Constantine was created by writer Alan Moore, artist Steve Bissette, and inker John Totleben.

When Constantine was introduced, he became a recurring character for Swamp Thing, serving as a “supernatural advisor.” His appearance was also based off of The Police frontman, Sting, a band the creators were fans of. In his first appearance, it actually wasn’t officially Constantine, he was just a character who bore a resemblance to Sting and appeared in the background. Later, he was revealed to be John Constantine. Constantine officially made his debut in “Swamp Thing #37” and appeared in the “Crisis on Infinite Earths” storyline. In 1988, Constantine evolved from the a side character and into his own run with Hellblazer. The Hellblazer run was published under the Vertigo run, a division of DC that was meant for older audiences. Constantine is a rarity in comic books, as he ages in real time, unlike other comic book characters who age slowly and take advantage of a somewhat floating timeline.

John Constantine is a sorcerer who dabbled in magic as a child while living with his aunt. Eventually, after leaving home, John started to hang out in occult groups, including another famous DC magic-user Zatanna Zatara. John’s first act of heroism was a young girl named Astra who had summoned a monster. John failed to stop the monster, however, and it dragged Astra to Hell. This left John emotionally unstable and upset, eventually causing him to end up in a mental hospital.

Because of this incident, John decided to help out those dealing with Occult problems, teaming up with heroes like Swamp Thing and Sandman. John also took on religious quests alongside God himself. Eventually, Constantine joined the mainstream DC Universe during the Brightest Day storyline.

In 2011, following the DC Universe reboot the New 52, Constantine joined the Justice League Dark team where he was in a relationship with Zatanna Zatara. Also, parts of his origin were changed including him learning magic at the expense of his parents instead of when he lived with his aunt. Constantine also played a role in the multiverse story Earth #2 teaming up with the Wonders of the World, which was that world’s main superhero team.

Constantine also had a one season TV series on NBC running from 2014-2015 portrayed by Matt Ryan. While originally a stand alone series, after the series’ cancellation, this version of Constantine was retconned to join the CW’s shared universe known as the “Arrowverse” with Ryan reprising his role in the Arrow episode “Haunted.” Ryan also appeared as Constantine in the series “Legends of Tomorrow.” Ryan also voiced Constantine in the 2017 animated film “Justice League Dark” and is set to voice the character in an animated web series.